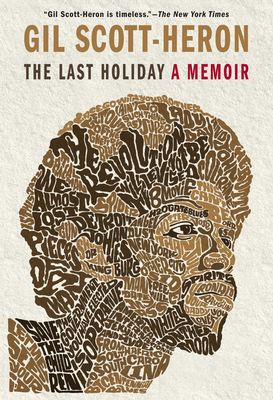 The stunning memoir of Grammy Lifetime Achievement Award winner Gil Scott-Heron, The Last Holiday has been praised for bringing back to life one of the most important voices of the last fifty years. Now in paperback, The Last Holiday provides a remarkable glimpse into Scott-Heron's life and times, from his humble beginnings to becoming one of the most influential artists of his generation. The memoir climaxes with a historic concert tour in which Scott-Heron's band opened for Stevie Wonder. The Hotter than July tour traveled cross-country from late 1980 through early 1981, drumming up popular support for the creation of Martin Luther King Jr. Day. King's birthday, January 15, was marked with a massive rally in Washington. A fitting testament to the achievements of an extraordinary man, The Last Holiday provides a moving portrait of Scott-Heron's relationship with his mother, personal recollections of Stevie Wonder, Bob Marley, John Lennon, Michael Jackson, Clive Davis, and other musical figures, and a compelling narrative vehicle for Scott-Heron's insights into the music industry, the civil rights movement, governmental hypocrisy, and our wider place in the world. The Last Holiday confirms Scott-Heron as a fearless truth-teller, a powerful artist, and an inspiring observer of his times.

Praise For The Last Holiday…

Praise for The Last Holiday

Leave it to Scott-Heron to save some of his best for last. This posthumously published memoir, The Last Holiday, is an elegiac culmination to his musical and literary career. He’s a real writer, a word man, and it is as wriggling and vital in its way as Bob Dylan’s Chronicles: Volume One.”Dwight Garner, The New York Times

A singular triumph. . . . It's [Scott-Heron’s] humility, combined with his gift for charming, unforced prose, that makes The Last Holiday such a fascinating memoir. . . . In Home Is Where the Hatred Is,’ Scott-Heron sang, God, but did you ever try / To turn your sick soul inside out / So that the world ... can watch you die?’ Most of us haven't; most of us have never had that kind of desperate courage. Gil Scott-Heron did, baring his imperfect soul to the world for decades. We're poorer for his loss, but richer for his words.”Michael Schaub, NPR.org

His tales of growing up in the South and North, of emerging as a writer and then as a singer and musician, are blunt, funny, caustic, fair-minded and occasionally loopy, just like his music.”Jim Higgins, Milwaukee Journal Sentinel

Much like his poetry, Scott-Heron's style is spare and effective, offering up jagged observations on fame, friendship and political and racial injustice. . . . Engaging and immensely human. And it is made all the more affecting with the knowledge of the calamities that were yet to come.”Fiona Sturges, The Independent (UK)

Even after his death, Scott-Heron continues to mesmerize us in this brilliant and lyrical romp through the fields of his life. . . . [a] captivating memoir.”Publishers Weekly (starred review)

”Gil Scott-Heron [was] a poet and polemicist whose lyrics have inspired and galvanized generations.”GQ

"[Gil Scott-Heron] was a warm, sensitive, altruistic and highly complex man whose music, lyrics and poetry will continue to inspire.”The Independent (UK)

Gil Scott-Heron, who died on May 27, 2011, aged sixty-two, was a composer, musician, poet, and author whose writings and recordings provided a vivid, and often stinging, commentary on social injustice and the black American experience; his declamatory singing style, allied to the overtly political content of his work, made him widely recognized as one of the inspirational figures of rap music. . . . Scott-Heron refined an intoxicating hybrid of jazz, Latin, and Afro idioms that established him in the vanguard of black American music in the 1970s.”The Telegraph (UK)