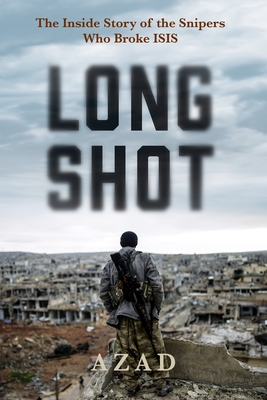 The Inside Story of the Kurdish Snipers Who Broke Isis

In 2002, at the age of nineteen, Azad, a young Kurdish man, was conscripted into Iran's army and forced to fight against his own people. Refusing to go to war against his fellow Kurds, Azad deserted and smuggled himself to the United Kingdom, where he was granted asylum, became a citizen, and learned English. But more than a decade later, having returned to the Middle East as a social worker in the wake of the Syrian civil war, Azad found that he would have to pick up a weapon once again. In September 2014, after twenty-one days of intensive training as a sniper, Azad became one of seventeen volunteer marksmen deployed by the Kurdish army when ISIS besieged the city of Kobani in Rojava, the newly autonomous region of the Kurds. In Long Shot, Azad tells the inside story of how the Kurdish forces fought nine months of bloody street battles against the Islamic State. Vastly outnumbered, the Kurds would have to kill the jihadis one by one, and Azad takes readers on a harrowing journey behind rebel frontlines to reveal the sniper unit's essential role in fighting, and eventually defeating, ISIS. Weaving the brutal events of war with personal and political reflection, Azad meditates on the incalculable price of victory--the permanent effects of war on the body and mind; the devastating death of six of his closest comrades; the loss of hundreds of volunteers who died in battle. But as Azad explains, these were sacrifices that saved not only a city but a people and their land. Rojava was freed, and ISIS, which once threatened the world, never fully recovered. At once wrenching and redemptive, Long Shot is a dramatic account of modern war that tells the story of how, against all odds, a few thousand men and women achieved the impossible and kept their dream of freedom alive.

Azad Cudi is a 35-year-old British national from a Kurdish background. Based in London and Brussels, Azad grew up in eastern Kurdistan, where he was conscripted into the army and escaped to the UK. Aged 19, he was granted asylum and citizenship, learnt English and began working as a journalist for the Kurdish diaspora media. In 2011, Azad was working for a television station in Stockholm when the Syrian civil war broke out and the Kurds established their autonomous enclave. Azad's response was to fly out to Syria and work as a social worker, but as the civil war expanded he became a fighter in the volunteer army, the YPG.
or support indie stores by buying on
Copyright © 2020 American Booksellers Association