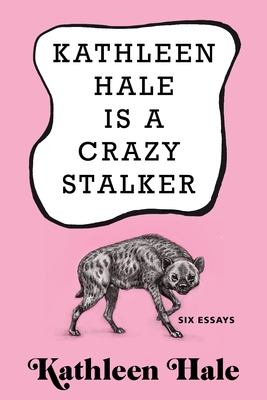 Kathleen Hale Is a Crazy Stalker

In six wide-ranging essays, Kathleen Hale traces some of the most treacherous fault lines in modern America--from sexual assault to Internet trolling, from environmental illness to our own animal nature. In these thought-provoking stories of predators and prey, Hale proves herself to be an exhilarating new voice whose writing is both fearless and profound.

In "First I Got Pregnant. Then I Decided to Kill the Mountain Lion," Hale recounts the month she spent tracking a wild cat lost in the Hollywood Hills while pregnant; in "Prey," she tells the troubling story of her sexual assault as a freshman in college; other essays recount the mesmerizing stories of a trip to hunt wild hogs in Florida, and a standoff with an anonymous blogger. Taking no prisoners and fearing no subject matter, Kathleen Hale wields razor-sharp wit, uncommon levels of empathy, and daring honesty, even in detailing some of the most difficult moments of her life.

Kathleen Hale has written for the Guardian, Elle, Vogue, GQ, Vice, and Hazlitt, among many others. She is the author of two young adult novels, one of which was named one of the best YA novels of 2014 by Time. In addition to her fiction and journalism, she has also written for Netflix, Marvel, CBS, HBO, and Hulu.
Loading...
or support indie stores by buying on