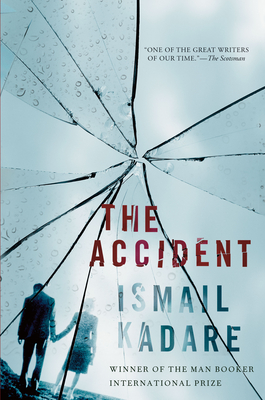 From Man Booker International Prize winner Ismail Kadare comes a dizzying psychological thriller of twisted passions, dual identities, and political subterfuge. Set against the tumultuous backdrop of the war in the Balkans, The Accident closely documents an affair between two young lovers. On a rainy morning in Vienna, a taxi pulls onto the autobahn only to crash into the median barrier moments later, hurling its two passengers--a man and a woman--from the backseat as it spins through the air. The driver cannot explain why he lost control; he only says that the mysterious couple seemed to be about to kiss. As the investigation into their deaths deepens, a lonely researcher will uncover a mutually destructive relationship that blurs the line between fact and fiction, fear and desire, and love and fixation over the course of twelve years. An alluring mixture of vivid hallucination and cold reality, The Accident is a fever dream of a novel that marks a bold and fascinating departure from Kadare's previous work.

Praise For The Accident…

The name of the Albanian novelist Ismail Kadare regularly comes up at Nobel Prize time, and he is still a good bet to win it one of these days. . . . [He] is seemingly incapable of writing a book that fails to be interesting. His new novel, The Accident, is provocative . . . not least because of the way it starts out as one kind of book and turns into something else entirely. This, you feel, is how Kadare sees the world: as a place always shifting and remaking itself. . . . [The Accident] takes you to the sort of place novels don’t routinely visit these days.”The New York Times

Vivid . . . Kadare dives deep into the pulling currents of love and death, carrying us down with him into a world which ranges, on the one hand, from dirty limericks about Bill Clinton’s sexual peccadilloes to profundities about the relation of stories and death. Anyone who has ever suffered through a love affair or wondered about other people caught up in such torments will find this brief novel essential reading.”NPR

[The Accident] is spare and often powerful . . . Kadare is inevitably linked to Orwell and Kundera, but he is a far deeper ironist than the first, and a better storyteller than the second. He is a compellingly ironic storyteller because he so brilliantly summons details that explode with symbolic reality. . . . [Kadare] is deeply interested in misreading, yet his prose has a classical clarity, so that much of his power as a storyteller has to do with his ability to provide an extraordinarily lucid analysis of incomprehensibility.”The New Yorker

A rich and strange examination of change . . . Kadare has constructed a maze of maybes where opaque motivations lead to startling ramifications . . . turning from realist mystery into surrealist foray. . . . Echoing with literary references, enriched by political relevance, Besfort and Rovena's investigation manages to seem groundbreaking.”San Francisco Chronicle

Kadare’s excursions into an eccentric stylemeticulous procedural scenes bloom into the surreal, languid eroticism mingles with the banal, dreams are scrutinized as readily as actual eventsprovide moments both curious and brilliant.”Publishers Weekly

Meticulously rendered and subtly nuanced. . . [The Accident] demands the reader’s attention as it delves deeper and deeper into tortured love. . . . At once an exploration of human nature and a keen observation of Albanian life in the aftermath of socialist rule. . . . . The text is spare, urgent . . . as compelling as the love affair it documents.”The Brooklyn Rail

Dark, dreamlike . . . A provocative exploration of the sinister underside of human relations . . . [and a] compulsive and unnerving excavation of love, power and the imperfect art of storytelling.”The Observer

An author who richly deserves the Nobel Prize.”The Huffington Post (Most Anticipated Novels for 2010)

If only most thriller writers could write with Kadare’s economy and pace. . . . Kadare, magician that he is, offers just enough information for his readers to make myriad interpretations. He is the most beguiling and teasing of writers who understands that what may not be apparent now may well be in a distant future. As he writes in the final pages of The Accident, From every great secret, hints occasionally leak out.’”The Sunday Herald (Scotland)

A thriller laden with reflections on the abuse of state power. . . . Deftly, Kadare recreates the shadowy atmosphere of rumor and recrimination in Albania during the dying days of communism in the late 1980s.”The Evening Standard