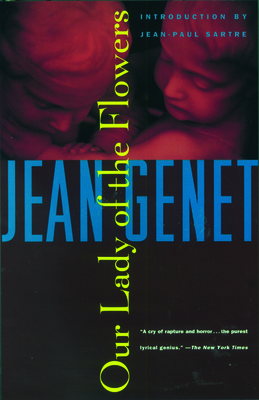 Our Lady of the Flowers (Genet)

Jean Genet's masterpiece, composed entirely in the solitude of his prison cell. With an introduction by Jean-Paul Sartre.

Jean Genet's first, and arguably greatest, novel was written while he was in prison. As Sartre recounts in his introduction, Genet penned this work on the brown paper which inmates were supposed to use to fold bags as a form of occupational therapy. The masterpiece he managed to produce under those difficult conditions is a lyrical portrait of the criminal underground of Paris and the thieves, murderers and pimps who occupied it. Genet approached this world through his protagonist, Divine, a male transvestite prostitute. In the world of Our Lady of the Flowers, moral conventions are turned on their head. Sinners are portrayed as saints and when evil is not celebrated outright, it is at least viewed with a benign indifference. Whether one finds Genet's work shocking or thrilling, the novel remains almost as revolutionary today as when it was first published in 1943 in a limited edition, thanks to the help of one its earliest admirers, Jean Cocteau.

Sartre was born in Paris, France. He had a doctorate in philosophy.
Loading...
or support indie stores by buying on