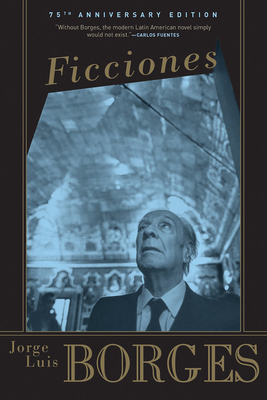 The seventeen pieces in Ficciones demonstrate the gargantuan powers of imagination, intelligence, and style of one of the greatest writers of this or any other century.

Borges sends us on a journey into a compelling, bizarre, and profoundly resonant realm; we enter the fearful sphere of Pascal's abyss, the surreal and literal labyrinth of books, and the iconography of eternal return. More playful and approachable than the fictions themselves are Borges's Prologues, brief elucidations that offer the uninitiated a passageway into the whirlwind of Borges's genius and mirror the precision and potency of his intellect and inventiveness, his piercing irony, his skepticism, and his obsession with fantasy. To enter the worlds in Ficciones is to enter the mind of Jorge Luis Borges, wherein lies Heaven, Hell, and everything in between.

Without Borges the modern Latin American novel simply would not exist. Carlos Fuentes

In resounding the note of the marvelous last struck in English by Wells and Chesterson, in permitting infinity to enter and distort his imagination, [Borges] has lifted fiction away from the flat earth where most of our novels and short stories still take place. John Updike

These brief Ficciones have to be read one at a time, and slowly; then they throb with uncanny and haunting power The Atlantic Monthly

Borges is the most important Spanish-language writer since Cervantes. Mario Vargas Llosa

[Borges] engages the heart as well as the intelligence; his genius strikes, undismayed as Theseus, through the labyrinths of our life and time to the accomplishment of new, inspiring and stunningly beautiful work. John Barth

One of the finest, subtlest, and least appreciated of comedians[Borges is] a central fact of Western culture. The Washington Post Book World

Borgess composed, carefully wrought, gnarled style is at once the means of his art and its objecthis way of ordering and giving meaning to the bizarre and terrifying world he creates: it is a brilliant, burnished instrument, and it is quite adequate to the extreme demands his baroque imagination makes of it . . . . Absolutely and most vividly original.
Saturday Review

JORGE LUIS BORGES was born into an intellectual family in Buenos Aires, in 1899. During his youth, the family lived in several countries including Spain and Switzerland. Because of his British ancestry, Borges learned English before Spanish, yet also acquired French and German at a young age. After World War I, Borges returned to Buenos Aires where he began his literary career, publishing in periodicals such as the prestigious Martin Fierro and Sur. In 1923, Borges published his first collection of poetry, entitled Fervor de Buenos Aires.
Loading...
or support indie stores by buying on