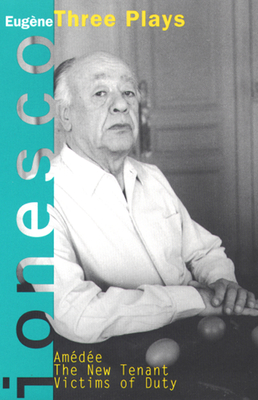 The author of such modern classics as The Bald Soprano, Exit the King, Rhinoceros, and The Chairs, Eug ne Ionesco is "one of the most important and influential figures in the modern theater" (Library Journal). This crucial collection combines The New Tenant with Am d e and Victims of Duty--the plays Richard Gilman has called, along with The Killer, Ionesco's "greatest plays, works of the same solidity, fulness, and permanence as those of] his predecessors in the dramatic revolution that began with Ibsen and is still going on." In Am d e, the title character and his wife have a problem--not so much the corpse in their bedroom as the fact that it's been there for fifteen years and is now growing, slowly but surely crowding them out of their apartment. In The New Tenant a similar crowding is caused by an excess of furniture--as Harold Hobson said in the London Times, "there is not dramatist . . . who can make furniture speak as eloquently as Ionesco, and here he makes it the perfect, the terrifying symbol of the deranged mind." In Victims of Duty, Ionesco parodies the conformity of modern life by plunging his characters into an obscure search for "Mallot with a t." In these as in all his plays, Ionesco poses and solves his tragicomic dilemmas with the brilliant blend of gravity and hilarity that is the hallmark of the absurdist theater.

Contributor Bio: Donald WatsonWatson is a Fellow of the American Institute of Architects and professor emeritus of Rensselear Polytechnic Institute.
Loading...
or
Not Currently Available for Direct Purchase