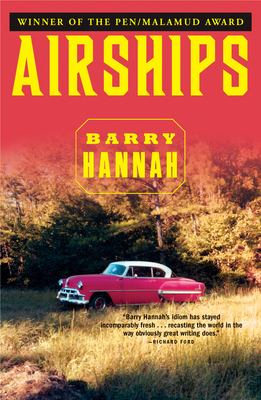 Now considered a contemporary classic, Airships was honored by Esquire magazine with the Arnold Gingrich Short Fiction Award. The twenty stories in this collection are a fresh, exuberant celebration of the new American South a land of high school band contests, where good old boys from Vicksurg are reunited in Vietnam and petty nostalgia and the constant pain of disappointed love prevail. Airships is a striking demonstration of Barry Hannah's mature and original talent.

"Barry Hannah is the best fiction writer to appear in the South since Flannery O'Connor." —Larry McMurtry

"Strong, original, tragic and funny in the same voice-a writer of violent honesty and power in the creative Southern tradition." —Alfred Kazin

"These stories are wonderful in the ways Mark Twain, Faulkner and Flannery O'Connor are wonderful when they are working the great vein of fierce and pitiless Southern comedy. The war stories in particular-joining, as they do for me, the clownish misery and colossal overkill of Vietnam to the American Civil War-are masterpieces of their kind. Hannah is more than just a new voice-he is half a dozen brilliant new voices." —Philip Roth

"Talents as broad as this thrive in novels but rarely take to the more constricting form of the short story. Airships proves Barry Hannah an exception . . . artfully rounded-off vignettes jumping with humor and menace. . . . The stories bounce off and echo one another, giving the book an impact greater than the sum of its parts. . . . Most young Southern writers resent being compared to such past giants as Faulkner and Flannery O'Connor. In embracing the gothic mode, Hannah has planted himself firmly on their turf. On the evidence of this book, their shadows are not stunting his growth." —Time

"Exhilarating! Hannah is afraid of nothing in experience. He runs to meet life and to transform it." —Denis Donoghue

"One reads Barry Hannah and is amazed! Airships places him in the very first rank of American literary artists, and leaves us breathless with the force of its feeling." —James Dickey

"Barry Hannah is an original, vital talent." —The Houston Chronicle