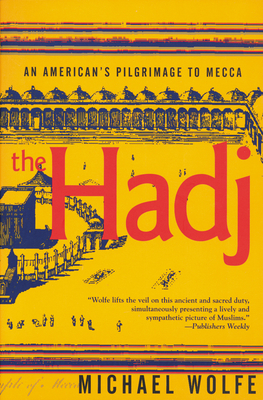 An American Pilgrimage to Mecca

The Hadj, or sacred journey, is the pilgrimage to the house of God at Mecca that all Muslims are asked to make once in their lifetimes. One of the world's longest-lived religious rites, having continued without break for fourteen hundred years, it is, like all things Islamic, shrouded in mystery for Westerners. In The Hadj, Michael Wolfe, an American who converted to Islam, recounts his own journey a pilgrim, and in doing so brings readers close to the heart of what the pilgrimage means to a member of the religion that claims one-sixth of the world's population. Not since Sir Richard Burton's account of the pilgrimage to Mecca over one hundred years ago has a Western writer described the Hadj in such fascinating detail.

Michael Wolfe is the author of eleven books of poetry, fiction, and travel. In 1990, he made the pilgrimage to Mecca and subsequently wrote two books on the subject, The Hadj: An American's Pilgrimage to Mecca and One Thousand Roads to Mecca: Ten Centuries of Travelers Writing about the Muslim Pilgrimage. For 15 years he was the publisher of Tombouctou Books. He is currently Co-Executive Producer and President of Unity Productions Foundation, a nonprofit media company that produces documentary films for television.
Loading...
or support indie stores by buying on