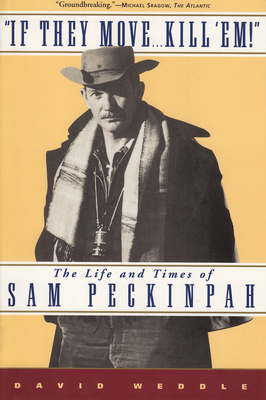 The Life and Times of Sam Peckinpah

The only major biography of Sam Peckinpah in print, David Weddle's If They Move...Kill 'Em! tells the wild story of Peckinpah's life with novelistic verve and does justice to one of the most important bodies of work in American cinema. Born into a clan of lumberjacks, ranchers, and frontier lawyers, David Samuel Peckinpah served in the Marines and then made his way to Hollywood, where he worked on a string of low-budget features before being hired as a writer for Gunsmoke in 1955. Quickly becoming the hottest writer in television, Peckinpah went on to direct a phenomenal series of features, including Ride the High Country, Straw Dogs, The Getaway, Pat Garrett and Billy the Kid, and The Wild Bunch. The life he led -- glamorous, wild, and beset by personal demons -- is as vivid as his films. A hopeless romantic and a grim nihilist, inspiration to such luminaries as DePalma, Scorsese, and Tarantino, Sam Peckinpah was an audacious American original. If They Move...Kill 'Em! is his wild and woolly story.