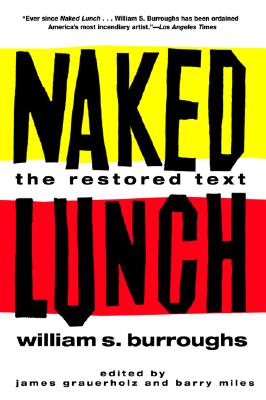 Since its original publication in Paris in 1959, Naked Lunch has become one of the most important novels of the twentieth century. Exerting its influence on the relationship of art and obscenity, it is one of the books that redefined not just literature but American culture. For the Burroughs enthusiast and the neophyte, this volume—that contains final-draft typescripts, numerous unpublished contemporaneous writings by Burroughs, his own later introductions to the book, and his essay on psychoactive drugs—is a valuable and fresh experience of a novel that has lost none of its relevance or satirical bite.

“A masterpiece. A cry from hell, a brutal, terrifying, and savagely funny book that swings between uncontrolled hallucination and fierce, exact satire.” —Newsweek

“Ever since Naked Lunch…William S. Burroughs has been ordained America’s most incendiary artist.” –Los Angeles Times

“A book of great beauty . . . . Burroughs is the only American novelist living today who may conceivably be possessed by genius.” —Norman Mailer

“A great, an essential novel…[that] prefigures much that has occurred in history, the popular media and high and low culture in the past four decades.” –The Commercial Appeal (Memphis)

“A creator of grim fairy tales for adults, Burroughs spoke to our nightmare fears and, still worse, to our nightmare longings. . . . And more than any other postwar wordsmith, he bridged generations; popularity in the youth culture is greater now than during the heady days of the Beats.” —Douglas Brinkley, The Los Angeles Times Book Review

“Naked Lunch will leave the most amoral readers slack-jawed; and yet a trek beneath the depraved surface reveals interweaving caverns that ooze unsettling truths about the human spirit. . . . In the same galloping, lyrical way Walt Whitman celebrated democratic toilers of all stripes, Burroughs gleefully catalogs totalitarian spoilers and criminal types—be they human or monster, psychological or pharmacological.” —Mark Luce, The Kansas City Star

“[Naked Lunch] made Burroughs’s reputation as a leader of the rebels against the complacency and conformity of American society. . . . An outrageous satire on the various physical and psychological addictions that turn human beings into slaves. . . . Burroughs’s vision of the addict’s life, by which we may infer the lives of all of us in some sense, is a vicious death-in-life of unrelieved abnegation, utter enervation and baroque suffering. Dante could not have envisioned such a post-Holocaust, post-apocalyptic circle of hell.” —Frederic Koeppel, The Commercial Appeal

“An absolutely devastating ridicule of all that is false, primitive, and vicious in current American life: the abuses of power, hero worship, aimless violence, materialistic obsession, intolerance, and every form of hypocrisy.” —Terry Southern

“Only after the first shock does one realize that what Burroughs is writing about is not only the destruction of depraved men by their drug lust, but the destruc­tion of all men by their consuming addictions . . . He is a writer of great power and artistic integrity engaged in a profoundly meaningful search for true values.” —John Ciardi

“Of all the Beat Generation writers, William S. Burroughs was the most dangerous. . . . He was anarchy's double agent, an implacable enemy of conformity and of all agencies of control-from government to opiates.” —Rolling Stone

“William was a Shootist. He shot like he wrote—with extreme precision and no fear.” —Hunter S. Thompson