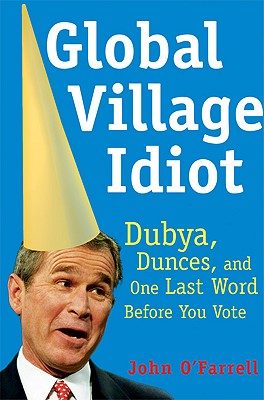 Dubya, Dunces, and One Last Word Before You Vote

Winner of the Best Columnist of the Year at the British Liars' Awards and Britain's finest satirist, O'Farrell takes dead aim in Global Village Idiot at cell phones, awards ceremonies, genetic sheep splicers, America's right wing cabal of dunces, dunderheads, dimwits, and the Big 'D' himself. "Just when we thought the lawlessness in Iraq was over," O'Farrell observes, "even more blatant incidents of looting have begun. With handkerchiefs masking their faces, two rioters roughly the height of George Bush and Donald Rumsfeld kicked in the gates of the largest oilfield and grabbed the keys of the gasoline trucks. 'Yee-haw It's all ours Millions of barrels of the stuff' they laughed. 'Yup ' added the leader ' and this mask guarantees my anonymousinity ' So after all these years there really is such a person as the Thief of Baghdad. Except strangely his accent sounded vaguely Texan."
A writer for the groundbreaking television show Spitting Image and contributor to the screenplay for the hit movie Chicken Run, O'Farrell meticulously researched his conclusions "by spending five minutes on the internet and then giving up." And while O'Farrell's sharpest barbs and stingers have often been written to come out of the mouths of grotesque puppets and Claymation chickens, this time around he keeps the best lines for himself: ''With the election of the 43rd President of the United States, the global village is complete," O'Farrell writes. "'It has its own global village idiot.'"