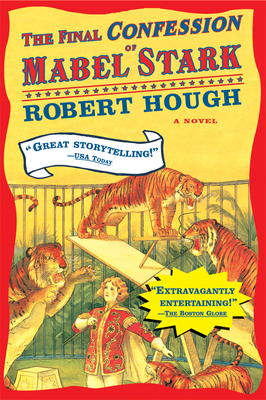 Mabel Stark was the greatest female tiger trainer in history. In the 1910s and '20s, during the golden age of the big top, she was the superstar of the Ringling Brothers Barnum & Bailey Circus, and one of America's most eccentric celebrities. A tiny, curvaceous Kentucky blonde in a white leather bodysuit, Mabel was brazen, sexually adventurous, and suicidally courageous. "The Final Confession of Mabel Stark is Robert Hough's brilliant, highly acclaimed nov-elization of her fantastic life. It is 1968--Mabel is just turning eighty and is about to lose her job at Jungle-land, a Southern California game park. Devastated by the loss of her cats, she looks back on her life and her five husbands: the fifth, a man with a curious taste for women's clothes, would one day be tragically mauled by her one true love, her ferocious yet amorous 550-pound Bengal tiger Rajah. Starting with her escape from a mental institution to begin her circus career as a burlesque dancer, Mabel's exquisitely voiced confession is a live wire of dark secrets, broken dreams, and comic escapades. It is a brilliant, exhilarating story of an America before television and movies, when the spectacle of the circus reigned and an unlikely woman captured the public imagination with her singular charm and audacity.
or
Not Currently Available for Direct Purchase
Copyright © 2020 American Booksellers Association