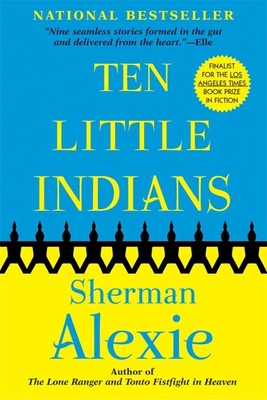 Sherman Alexie is one of our most acclaimed and popular writers today. With Ten Little Indians, he offers nine poignant and emotionally resonant new stories about Native Americans who, like all Americans, find themselves at personal and cultural crossroads, faced with heartrending, tragic, sometimes wondrous moments of being that test their loyalties, their capacities, and their notions of who they are and who they love.
In Alexie's first story, "The Search Engine," Corliss is a rugged and resourceful student who finds in books the magic she was denied while growing up poor. In "The Life and Times of Estelle Walks Above," an intellectual feminist Spokane Indian woman saves the lives of dozens of white women all around her to the bewilderment of her only child. "What You Pawn I Will Redeem" starts off with a homeless man recognizing in a pawn shop window the fancy-dance regalia that was stolen fifty years earlier from his late grandmother.
Even as they often make us laugh, Alexie's stories are driven by a haunting lyricism and naked candor that cut to the heart of the human experience, shedding brilliant light on what happens when we grow into and out of each other.

In [Alexie’s] warm, revealing, invitingly roundabout stories, the central figures come in all shapes and sizes, sharing only their wry perspective on Indian life off the reservation. . . . They are affectionate tales of dealings between men and women.”Janet Maslin, The New York Times

Alexie has always been a master of the short story. . . . In [Ten Little Indians]Alexie blends humor, biting sarcasm and emotion, varying the book’s mood and presenting a spectrum of voices.”Deirdre Donahue, USA Today

This is a stellar collection of full-hearted, energetic stories.” Arion Berger, People Magazine

With wicked humor and a piercing eye, Alexie dances liehely across America’s racial and historical divides. Not since Langston Hughes’s classic collection The Ways of White Folks have these rifts been so wonderfully minded as they are in Ten Little Indians. . . . This is an inspired collection . . . told with a bittersweet and irrepressible touch. . . . Alexie, like his characters, is on a modern-day vsion quest, and his powers are only getting stronger.” Anderson Tepper, Time Out New York

Alexie’s language has energy; his dialogue is both sharp and believable. His characters are ordinary people, extraordinary in their own unique ways.” Karen Joy Fowler, The Washington Post Book World

The stories are wide, expansive, and focus on the lives of Spokane Indians inside Seattle for the most part, many of whom are aspiring to nothing less than greatness. . . . The haunting and powerful fictions of Ten Little Indians deserve to be read, contemplated, and savored.” William J. Cobb, The Houston Chronicle

[Alexie’s] stories, rambunctious and exuberant, bristle with an edgy and mordant humor all his own.” Robin Hemley, The Chicago Tribune

The subjects of these nine stories are passionate in their odd pursuits. Alexie, who wrote the 1998 film Smoke Signals, is an established chronicler of the rituals and ruptures of modern Native American life, but his eye for hard truths transcends any ethnic pigeonholing.” Emily Mead, Entertainment Weekly

Ten Little Indians deals with a lot of things nobody talks about, from the always loaded subject of cultural authenticity to the influence of politics on everyday life.” David L. Ulin, The Los Angeles Times

Alexie paints a full range of human emotions and conditions on a canvas he knows well. . . . Alexie’s nine little worlds contain a quietly glorious literary excellence; each is as pleasing to the mind and the heartand even the sensesas witnessing the perfection of nature. . . . Neither precious nor academic, Ten Little Indians is a must-read for anyone who desires searing, sad, funny and modern tales of American Indian culture, for readers who love beautifully crafted short fiction and for readers who appreciate both.” Scott Lax, The Cleveland Plain Dealer

Sherman Alexie’s nine well-received stories about American Indian protagonists are energized by the tension between traditional ways and life off the reservation, by trying to decide what to carry and what can be left behind yet still remain oneself in a shifting world.” Dallas Morning News

The nine stories in Ten Little Indians are poignant without being sentimental, witty without being brittle, and written with force and clarity. They’re funny, too.” Diane Roberts, Atlanta Journal-Constitution

Kindness is as much a theme in Ten Little Indians as its city settings and its humor in the face of tragedy. Alexie treats both Spokane and non-Spokane characters with extraordinary measures of kindness. Characters are redeemed or not redeemed but always treated with generosity. Despite the sadness achingly present in these stories, the reader is left with a sense of healing and hope.” Karen M. Poremski, The Columbus Dispatch

This balance between poetic desire and the hopeless harshness of life is what makes Alexie’s work unique. That painful process of reclaiming something good, something of the spirit, something intensely personal, told with humor and no false sentiment, runs through much of this fine collection.” Richard Wallace, The Seattle Times

Alexie is having such a good time, we can have one too.” Michael Harris, The Los Angeles Times Book Review

Alexie’s literary voice is distinctive, idiosyncratic, and disarmingly compelling. . . . What unites [the characters] is their deeply conflicted sensibility; perceptive about many things, but often clueless about their own motives; cynical about the world and their place in it but often sentimental and deeply emotional; outraged by the discrimination and damage inflicted on them, but caustically and brutally frank about their own failings and shortcomings as a culture. . . .This is a wonderful book that could have been written only by Sherman Alexie.” Steve Brzezinski, The Antioch Review

Ten Little Indians once again shows [Alexie] to be not just one of the West’s best, but one of the most brilliantly literate American writers, even funnier than Louise Erdrich, even more primal than Jim Harrison, and even more eloquent than Annie Proulx.” Ron Franscell, Chicago Sun-Times

The strength of this book lies in the characters. Alexie writes them with such compassion that even if they abandon their children, it becomes understandable.” Jessa Crispin, The Austin Chronicle

[Alexie] is a provocateur who never left a pot unstirred. He’s a trickster not above mocking himself. He’s a proud Spokane/Coeur d’Alene Indian who is just as likely to skewer Indians as he is totem-loving liberals and Yale-educated conservatives. And he’s a bestselling author who knows exactly how far to push the sensibilities of his gentle readers. Alexie ranks with the best, even if he stands alone.” Ron Franscell, San Jose Mercury News

Ten Little Indians runs the gamut of human emotions, from grief to envy, rage to shame, conjuring a cast of Indians so rich and so vibrant it makes the old nursery rhyme seem not just puerile but racist.” John Freeman, St. Louis Post-Dispatch

This near-perfect fiction collection is dense with humor, action and affecting characters.” Time Out New York

Alexie’s powers of characterization are extraordinary and his stories packed thick with details, yet everything flows effortlessly. . . . As he did in The Toughest Indian in the World, Alexie proves that in this literary kingdom it is indeed a fine day to be indigenous.” Emiliana Sandoval, The Detroit Free Press

Alexie delivers nine more short stories that easily live up to the rest of his acclaimed canon.” Thomas Haley, The Minneapolis Star-Tribune

Alexie isn’t only a top-notch writer, he is also a cultural star. . . . All nine [stories] are insightful and original.” Jim Grinnell, The Bloomsbury Review

These stories are about truth, and Alexie is a writer in relentless pursuit of truth. Alexie’s characters have an articulateness, a longing for better lives and a willingness to bare their souls that is heart-wrenching and beautiful.” Tricia Snell, The Oregonian

What links the characters [in these stories] is their need to understand, to divine meaning, and to find truth. In that way they are not unlike non-Indians. Their ruminations conveniently (and perhaps, appropriately) echo Alexie’s own keen observations of contemporary American society. Alexie’s observations are as wise as they are brutally sharp.” Greg Morago, The Harford Courant

A collection of nine hilarious, powerful stories that capture not just the Native American experience, but a broader, more universal one. . . . Powerful, sad and laugh-out-loud funny, these stories could only be told by Sherman Alexie.” Jean Blish Siers, The Charlotte Observer

Most of the central characters in these stories are, like Alexie, Spokane Indians, and there’s a ruthlessness to the way he describes them that can only be rooted in memory and a prickly sort of love.” Anne Stephenson, The Arizona Republic