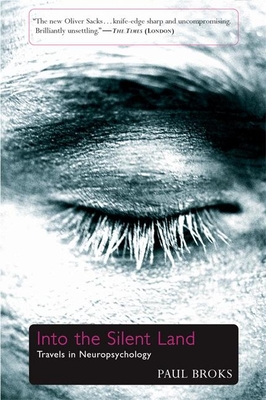 Into the Silent Land

Into the Silent Land is a collection of case studies and short tutorials on neuropsychology, which is the science of analyzing the relationship between personality, performance, and the anatomical and physiological structure of the brain. Fusing classic cases of neuropsychology with the author's own case studies, personal vignettes, philosophical debate, and thought provoking riffs and meditations on the nature of neurological impairments and dysfunctions. Some highlights include: "I Don't Love You Anymore, Do I, Love?": two men who suffer almost mirror image traumatic lesions to the brain learn to cope with the loss of their ability to empathize with other human beings, thus living a life without highs or lows, only sedation. This recalls the classic case of railway worker named Finneas Gage. Gage accidentally had a railroad spike slammed into his head, piercing his frontal lobe. Miraculously, he wasn't killed, but surgeons of the day were unable to extract the spike for fear that it would cause further damage. Thus Finneas was forced to live the rest of his life with the spike in place in his head. As a result of the damage to the lobe however, Finneas would fly into blind rages for no reason at all. Psychologists concluded from this study that hostility is connected to physiological events occurring in the frontal lobe. "The Sea and the Almond": a young woman who suffers from daily grand mal seizures agrees to a radical surgery that involves removal of the amygdala (from the Greek for almond) and part of the hippocampus (seahorse), which is responsible for memory and all conscious recall. Broks' experiences recall a classic neuropsychological case where a patient named H.M. had intractable epilepsy. The only way to cure the epilepsy was to remove the focus of the seizures, which were starting independently from both temporal lobes. Both lobes were removed and the seizures stopped, but the patient's memory was gone, along with the ability to create new memories. The patient had to be reintroduced to his coworkers on a daily basis, and would mistake pictures of himself for his father. "The Ghost Tree": A woman infected with a common cold sore virus (herpes simplex) is onset with a severe infection that finds it way into her brain, where large areas of the anterior temporal lobes have been eaten away. As a result, she has a combination of 'fearlessness' (or 'recklessness') whereby she'll walk into traffic, or stand by with a smile on her face during a mugging, while on the other hand cower in fear over an argument on a TV soap opera. "The Blue Bicycle": A young girl is struck by a car in front of her father while riding her brand new blue bicycle. She loses her ability to judge distances or risky situations, but at the same time develops a rapacious capacity for learning foreign languages. After failing her driving test twice, Broks takes her on a diagnostic driving test that is seemingly banal, until it almost ends in a head on collision. Advised that she shouldn't probably be driving, the girl takes her third driving test and passes. "Voodoo Child": A factualized case of a man who, catapulted into a midlife crisis, abandons his job, his wife and family, and moves into a new town to start a new life only to discover he has a large, benign, brain tumor that has been eating away at the frontal lobes of his brain for years. "Swallowing the Dark": The story of "Eggshell Boy," a teenager who fell three stories down an empty elevator shaft and as a result was left with an asymmetrical head "convex on the right, concave on the left, with a deep oval depression like the shell of a hard-boiled egg cracked with a spoon." Broks analyses what remains of a "self" or a "soul" after severe neurological trauma robs a person of everything that makes him unique. "Einstein's Brain": A curious history of what happened to Einstein's Brain after he died. "The Visible Man": a stunning Kafkaesque tale that imagines a day in the life of a man whose brain is suddenly visible for everyone to see. "I Think Therefore I am Dead": both a meditation on human consciousness and an intimate case study chronicling Broks' efforts in working with a patient suffering from a debilitating illness that has no diagnosis or cure. "To Be Two Or Not To Be": A fantasy in the tradition of the philosophical thought experiment, based on the philosopher Derek Parfit's ideas concerning the nature of personal identity. This is a lively 'Imagine if...' scenario designed to challenge our ordinary intuitions by taking us into imaginary realms where fictional characters find themselves in extraordinary (sometimes technically impossible) circumstances.