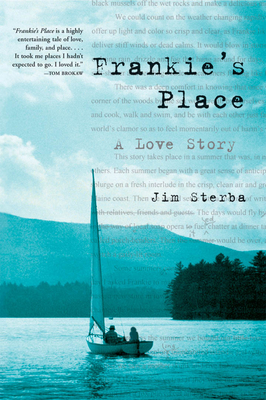 "To Sterba, his beloved's cabin is an enchanted castle by the sea, and like its fairy-tale prototype, Frankie's place imposes mysterious laws and rituals, which the aspirant must master before he is deemed an acceptable consort. His prize is, indeed, a woman of daunting attributes: 'She was blond, tall, beautiful, smart, famous, and scary.'" -The Los Angeles Times Book Review A Tracy-Hepburn romance in which a down-to-earth newspaperman charms a New York sophisticate and brings her down a notch, while she teaches him a thing or two.
Frankie's Place, A Love Story, is a portrait of a place and a marriage. It's about a sophisticated, blond New York City intellectual who falls for a Michigan farm boy turned foreign correspondent. Every year after the long Manhattan winter, Frances FitzGerald, author of the Pulitzer Prize winning Fire in the Lake, heads north to Mount Desert Island to spend the summer writing. Her simple cottage looks over a cove, part of Somes Sound, which is full of sailboats and lobster buoys. People come to visit and one year Jim Sterba, an acquaintance, comes to for a week, and then the next year it's two, until gradually he becomes a fixture in her life for the whole summer. The story chronicles one particular summer that Jim and Frankie are spending at Frankie's place, a spot Jim considers "the perfect writer's retreat." "Frankie's place couldn't be special to me without Frankie. The cozy house, the woods and water, the lovely views and the extraordinary island were part of a stage on which our relationship grew...." Immediately upon arriving, they start the summer with a swim in the icy ocean, and a morning plunge will begin every day thereafter. Sterba charmingly depicts their busy routine in Maine of writing straight through the core of the day, and filling late afternoons-at four o'clock all work stopped-then there are arduous hikes, blueberry-picking, mussel-gathering, and scavenging for mushrooms. Wonderful recipes including ingredients from the fruit of their labor appear throughout the book-this is true Yankee cooking with corn roasted fully husked in the oven, and Frankie engaged in the gruesome art of killing the lobster. Jim loves everything quirky, odd, and old-fashioned about the nearest village to the house - from its bizarre Camden Marine Radio where he eavesdrops on lonely fisherman speaking out into the night, to its weather station which monitors the constant push and pull of frontal systems that affect the delicate coastline, to Mr. Pyle, who is at once the town's cop, the librarian, and part-time soda jerk. Interwoven are flashbacks - we hear about Sterba's burgeoning career as a journalist, his intense years as a foreign correspondent for The New York Times and why he switches to writing for The Wall Street Journal. Growing up on a struggling dairy farm in Michigan, young Jim was responsible for all the strenuous and constant farm chores. In stark contrast, Frankie's family goes back to the earliest settlers of Boston. The Parkmans and the Peabodys are from Boston (including Endicott Peabody, founder of the Groton School), and the FitzGeralds are of New York. Her mother, Marietta Tree was a socialite and a big Democrat, who was married first to Frankie's father, CIA operative Desmond FitzGerald, and then to an Englishman Ronald Tree. Frankie's life as an only child, spirited between ritzy Manhattan and a grand estate in England, was lonely. At one point, she told Jim that while living in the English castle Ditchley, it was so large she could never find her mother in its twenty-six bedrooms. So, Frankie's house becomes a place for both of them to find substantive rest, spiritual space, and loving comfort. It is for both their first real home. As fall approaches, Jim and Frankie head back to New York for their "second autumn" (New York's leaves turning later than Maine's), and for a long winter in a new apartment where they have finally moved in together. Previous years had gone by where both were unable to give up their old digs, essentially overgrown work places. The book closes with a conversation Frankie's Uncle George is having with Jim, Frankie, and a few others about the family burial plot. A family stone of red granite with the inscription-Peabody--has been placed there, bayberry bushes have been planted, and Uncle George mentions a space available and asks whether Jim would be interested. Jim is completely taken aback. He can't imagine any other place he would want to be forever. He says yes. Frankie's Place is the generous portrait of both a place and a marriage that Sterba develops with wry, loving detail.