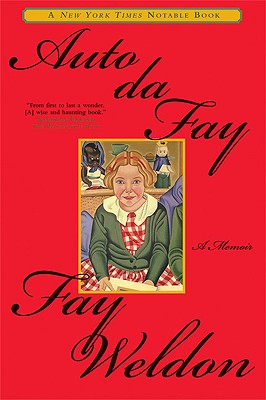 Fay Weldon, one of England's best-selling and most celebrated authors, looks back on her life as wife, lover, playwright, novelist, feminist, antifeminist, and bon vivant in this funny and engaging memoir. She writes brilliantly about her upbringing in New Zealand, as young and poor girl in London, as an unmarried mother, wife, lover, playwright, novelist, feminist, anti-feminist, and winer-and-diner: there is little ground she's failed to cover.
Brought up among women-her intrepid mother, grandmother, and sister-Weldon found men a mystery until the swinging-sixties London introduced her to the indecent, the hopeless, and the golden-footed. A central figure among the Bohemian writers and artists of the sixties, she has maintained this unique position through four turbulent decades. An icon to many, a thorn in the flesh to others, she has never failed to excite, madden, or interest.
Born Franklin Birkinshaw in Barnt Green, Birmingham, in 1931, most of Weldon's childhood was spent in New Zealand. Her glamorous father, a philandering doctor, played only a minor role as was generally absent. Fay's intrepid mother and bohemian grandmother raised her along with her sister, Jane. Weldon's family, it turns out, has an impressive literary pedigree; her grandfather, Edgar, Uncle Selwyn and, for a brief while, her mother were all novelists. Arriving in London from New Zealand, just after the Second World War, her mother kept the brood together by working as a servant in a grand house-the experience of living below stairs later helped Weldon to script the television drama Upstairs, Downstairs.
After graduating from St. Andrews University, Weldon worked in the Foreign Office until becoming pregnant. Defying the conventions of the times, she remained a single parent. She struggled, living in poverty in post-war London made all the more grinding since she was trying to maintain respectability. Following a stint at the Daily Mirror, she drifted into advertising before desperately entering into a crushingly awful marriage of financial (in)convenience-a marriage so dreadful she writes of it in the third person as if writing about characters in a novel. With cool, unwavering honesty she details the truly crushing experience of being hitched to a celibate, Masonic headmaster who encouraged her to work in a seedy West End nightclub. She escapes eventually, and finds true love at thirty after meeting Ron Weldon at a party. When this union, too, comes to an end, Fay's packed enough experience into her life to begin her career as a writer. She develops into a bohemian intellectual, and works alongside poets such as Edwin Brock, David Wevill and Peter Porter, pens winning advertising slogans, and truly begins writing seriously. Fay closes her riveting memoir as she drops what will be her first success, a television play, into a Regents Park mailbox on her way to the hospital to give birth. The play will be the first of many triumphs for a writer whose provocative oeuvre has never failed to excite, madden, or interest.