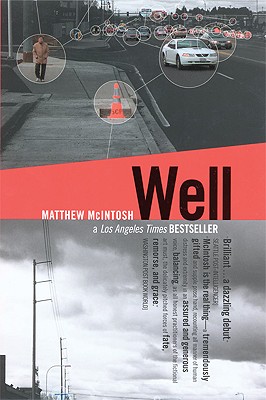 Critically acclaimed Well marks the astonishing debut of an author with a singular and unflinching voice and vision. Set primarily among the working-class of a Seattle suburb called Federal Way, this highly original novel-told in the form of interlinked short stories- extols the lives of a large cast of characters lost in various modes of darkness and despair. Whether struggling to come together or desperately alone, they grapple with dark compulsions and heart-rending afflictions. As if trapped at the bottom of a well, they search for relief, for a vehicle into the light they know is up and outside.
They search in sex, in drugs and violence, and in visions of Apocalypse and Creation, dreams of angels and killers and local sports championships. Compact, finely wrought, powerfully charged, Well ultimately rises toward the light, in a finale which echoes with the exhilarating human capacity for hope. The result is a mesmerizing tour de force that will establish Matthew McIntosh as a bold and progressive new voice of American fiction.
Stories:
BURLESQUE
Snapshots of various troubled couples on the day that the Seattle SuperSonics lose their chance at advancing to the NBA finals. Len and Adda are fighting- Len is in love with Adda (she is "the girl he wanted") but she is torn, and is leaving the next day to spend a week with her fiancee to make sure that breaking up with him is the right thing. Len becomes jealously enraged when he finds out Adda and her fiancee will be sleeping in the same bed, begging her not to touch the man.
Nate and Sammie are also fighting: Sammie insists that a certain girl who is trying to convert Nate stop calling their house. Nate gets tired of Sammie's hysteria and beats her, only to become terrified at what he has done.
A first person narrator recalls his rather pathetic adventures with prostitutes in Thailand, where he made big money at an English language newspaper and lived like a king. He brought a woman over who now resents him for it, and they have a staid marriage while he continues to dream over prostitutes.
Raymond and his wife are at the SuperSonics game and get in a fight when Ray's wife sees he is ogling cheerleaders through his binoculars. He misses it when the team loses at the buzzer.
The SuperSonics janitor comes home to his wife, who is pregnant. He masturbates as he recalls the time he slipped out to watch a burlesque show at the strip joint across the street.

MODERN COLOR / MODERN LOVE
II. Shelly is a Korean 16-year-old boarding school student who likes having sex with strangers in bars and doing crystal meth. She falls a sleep and crashes her car through a fence, causing her mother to cry and call her "A Real American Whore" when she picks her up in prison. She meets an older man who takes her in but finally gets sick of giving her money to drink and sends her home. When her mother isn't home, she goes to the nearest bar.
III. A phone sex patron can't make up his mind what he wants his fantasy to be and the story concludes: "Do you realize what this is costing?"
IV. The story of Davin, a warehouse worker, and Sarah, who are in a band together. Davin is loving and committed to Sarah but Sarah doesn't see a future with him. She gets pregnant and they grow distant. One day Davin gets in a fight with a co-worker and is paralyzed on his left side after being hit in the skull. Sarah takes care of him in the hospital, but when he returns home he begins drinking. One night he picks the 2-year-old up while drunk and Sarah becomes hysterical when the child begins crying. He beats Sarah and is issued a restraining order. Sarah moves out and eventually begins dating a construction worker she does not really love.

CHICKEN
A group of guys gets into a game of chicken with a car containing a guy and a bunch of girls. When the guys cut the girls off suddenly, the driver of the latter car approaches the guys in an insane rage and finally hits the driver in the nose.
Santos and his young partner work at a hotel-they go to Denny's when they should be training an Ethiopian who messes up on his first day. The guys get fired for this and Santos, humiliated, tells the young partner about the time he made a buzzer shot in a college basketball game only to have the game-winning points taken away from him by the refs.
A kid drops some pills at the bus station and gets stuck on the Greyhound listening to a vet recount his experience in Guam, where he dug a whole to save himself from gunfire.

VITALITY
SPACEMAN: Charlie is a lonely gay bartender who has started to feel old and fat. Although he loves bartending and meeting people, etc., he loses his job because he has kept drinking on the job after repeated warnings. He laments that he has never been in love. On the night he loses his job he goes home to try to clean his filthy house but ends up vomiting into the toilet, longing for company.
DAMAGE: A young man enters a peep bbbbbbooth with his friends and is struck by his ugly reflection as he looks at the beautiful dancer. When his friends begin teasing the dancer by sticking their tongue out, the bouncers approach them and a brawl ensues. The young man "pounds the Living Holy Fuck" out of the bouncers.
ACHE:
A man begins experience atrocious cyclical spells of pain, incoherence, and anxiety after he dives into a swimming pool one day and hits his head on the bottom. His parents take him to all variety of specialists who prescribe drugs, etc. and eventually he becomes dependent on them, and a drunk. He moves to London to get away from it all and meets a girl who wants to marry him but eventually assaults her in a fit of hysteria. He moves back home and lives a quiet life. When the pain is gone, he discovers that he misses it.
THEY ALL WAIT FOR YOU:
A man finds out that he will die of cancer and spends his day at the Trolley bar, getting hammered and thinking about the pointlessness of.