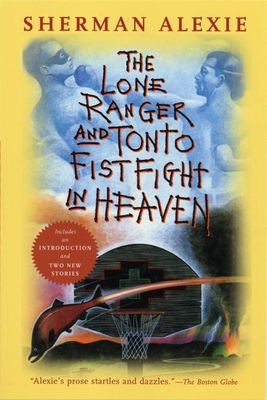 The Lone Ranger and Tonto Fistfight in Heaven

In this darkly comic short story collection, Sherman Alexie, a Spokane/Coeur d'Alene Indian, brilliantly weaves memory, fantasy, and stark realizxsm to paint a complex, grimly ironic portrait of life in and around the Spoke Indian Reservation. These 22 interlinked tales are narrated by characters raised on humiliation and government-issue cheese, and yet are filled with passion and affection, myth and dream. There is Victor, who as a nine-year-old crawled between his uncoscious parents hoping that the alcohol seeping through their skins might help him sleep. Thomas Builds-the-Fire, who tells his stories long after people stop listening, and Jimmy Many Horses, dying of cancer, who writes letters on stationary that reads From the Death Bed of James Many Horses III, even though he actually writes them on his kitchen table. Against a backdrop of alcohol, car accidents, laughter, and basketball, Alexie depicts the distances between Indians and whites, reservation Indians and urban Indians, men and women, a dn most poetically, between modern Indians and the traditions of the past.

Praise For The Lone Ranger and Tonto Fistfight in Heaven…

“Again and again, Alexie’s prose startles and dazzles with unexpected, impossible-to-anticipate moves. With this stunning collection, Sherman Alexie has become quite clearly an important new voice in American literature.” —The Boston Globe

“Poetic [and] unremittingly honest . . . The Lone Ranger and Tonto Fistfight in Heaven is for the American Indian what Richard Wright’s Native Son was for the black American in 1940.” —The Chicago Tribune

“There is, to be sure, too much booze and too little hope on the reservation in Alexie’s work, but also resilient real people—living and loving, and, above all, laughing.” –Seattle Post-Intelligence

“Poetic and unremittingly honest . . . The Lone Ranger and Tonto Fistfight in Heaven is for the American Indian what Richard Wright’s Native Son was for the black American in 1940.” —The Chicago Tribune

“Alexie blends an almost despairing social realism with jolting flashes of visionary fantasy and a quirky sense of gallows humor. In Sherman Alexie's voice we hear the voice of a people asking questions we cannot answer or avoid.” —The Bloomsbury Review

“A compelling and impressive collection.” —The Washington Times

“An impressive collection. . . . His tales include all the ingredients of contemporary American Indian life: humor, heartbreak, and humanity.” —Willamette Week

“Stunning and compelling. Alexie is a visionary and by far the best writer I've seen published in recent years.” —Talk of the Town (Washington)

“Extremely fine. . . . Alexie writes with simplicity and forthrightness, allowing the power in his stories to creep up slowly on the reader.” —Publishers Weekly

“Alexie writes with grit and lyricism that perfectly capture the absurdity of a proud, dignified people living in squalor, struggling to survive in a societ they disdain. Highly recommended.” —Library Journal

“This collection of 22 short stories based on the Spokane Indian Reservation is often humorous and insightful. It views American Indian lives from a contemporary standpoint and addresses the issues facing reservation life today.” ––Diverse Issues in Higher Eduation