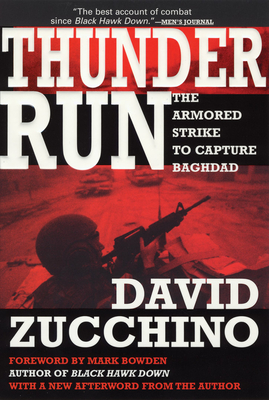 The Armored Strike to Capture Baghdad

In one of the boldest gambles in modern military history, just three battalions and fewer than a thousand men launched a violent thrust of tanks and Bradley Fighting Vehicles into the heart of a city of 5 million people and, in three bloddy days of combat ended the Iraqi war. Thunder Run is the story of the surprise assault on Baghdad-one of the most decisive battle in American combat history-by the Spartan Brigade, the Second Brigade of the Third Infantry Division (Mechanized).
More than just a rendering of a single battle, Thunder Run is a candid account of how soldiers respond under fire and stress and how human frailties are magnified in a war zone.