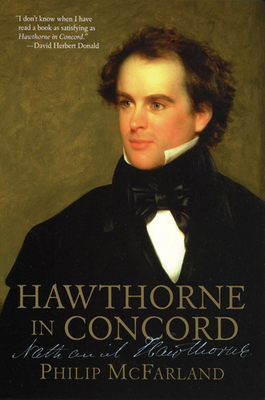 On his wedding day in 1842, Nathaniel Hawthorne escorted his new wife, Sophia, to their first home, the Old Manse in Concord, Massachusetts. There, enriched by friendships with Thoreau and Emerson, he enjoyed an idyllic time. But three years later, unable to make enough money from his writing, he returned ingloriously, with his wife and infant daughter, to live in his mother's home in Salem.
In 1853 Hawthorne moved back to Concord, now the renowned author of The Scarlet Letter and The House of the Seven Gables. Eager to resume writing fiction at the scene of his earlier happiness, he assembled a biography of his college friend Franklin Pierce, who was running for president. When Pierce won the election, Hawthorne is appointed the lucrative post of consul in Liverpool.
Coming home from Europe in 1860, Hawthorne settled down in Concord once more. He tried to take up writing one last time, but deteriorating health finds him withdrawing into private life. In Hawthorne in Concord, acclaimed historian Philip McFarland paints a revealing portrait of this well-loved American author during three distinct periods of his life, spent in the bucolic village of Concord, Massachusetts.