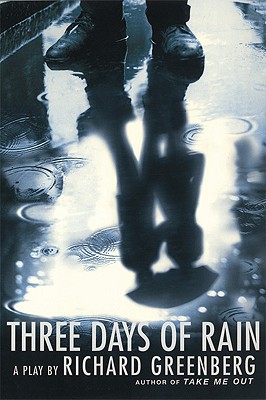 Set in New York, Three Days of Rain centers on a brother Walker, his sister Nan, and their childhood friend Pip who meet to settle their parents' estate. The two fathers were long-time friends and partners in architecture; their legacy is the brilliantly daring creation, the 1960's Janeway House. In this tense and brittle reunion, much more is at stake than who gets the house.
Brother and sister discover their father's sparse diary, and use it to create a story for themselves that will explain away the present and make sense of their parent's passionless marriage. Over the three days of rain entered in the young architect's diary, the same three actors then play their own parents and reveal a romantic significance and creative dilemma that none of these children could ever have imagined.
Julia Roberts will make her Broadway debut in spring 2006 as Nan in a revival of Richard Greenberg's Three Days of Rain.

Richard Greenberg is the winner of "Newsday's" George Oppenheimer Award for Best New American Playwright, the Molly Kazan Playwriting Award, the Pen/Laura Pels Award. "Three Days of Rain" was a finalist for the Pulitzer Prize. He lives in New York City.
Loading...
or support indie stores by buying on