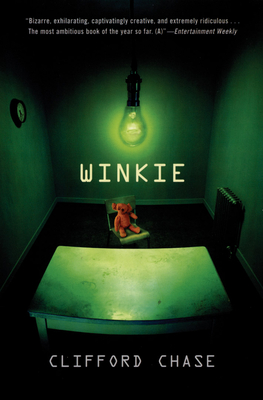 In Cliff Chase's scathingly funny and surprisingly humane debut novel, the zeitgeist assumes the form of a one-foot-tall ursine Everyman -- a mild-mannered teddy bear named Winkie who finds himself on the wrong side of America's war on terror. After suffering decades of neglect from the children who've forgotten him, Winkie summons the courage to take charge of his fate, and so he hops off the shelf, jumps out the window, and takes to the forest. But just as he is discovering the joys and wonders of mobility, Winkie gets trapped in the jaws of a society gone rabid with fear and paranoia. Having come upon the cabin of the mad professor who stole his beloved, Winkie is suddenly surrounded by the FBI, who instantly conclude that he is the evil mastermind behind dozens of terrorist attacks that have been traced to the forest. Terrified and confused, Winkie is brought to trial, where the prosecution attempts to seal the little bear's fate by interviewing witnesses from the trials of Galileo, Socrates, John Scopes, and Oscar Wilde. Emotionally gripping and intellectually compelling, Winkie exposes the absurdities of our age and explores what it means to be human in an increasingly barbaric world.

The courtroom scenes are wildly, brilliantly comic. . . . But Chase isn't just being cute here. . . . At heart, the book is an argument for openness and inner strength on every imaginable front. Chase makes this out-of-left-field story work brilliantly; a funny and sweet yet seriously topical novel.”  --  Kirkus Reviews (starred review)