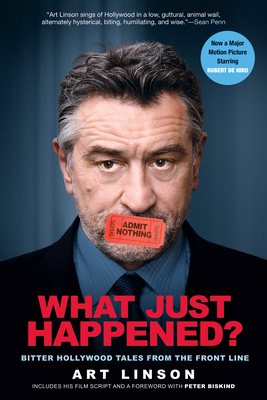 As a Hollywood film producer, Art Linson has had a hand in producing some of the most unforgettable films of the last half century--Fast Times at Ridgemont High, The Untouchables, Fight Club--and has worked with some of America's finest actors and directors. Dubbed by the Los Angeles Times "a breezy anatomy of ritual humiliation," Art Linson's Hollywood memoir What Just Happened? gives us a brutally honest, funny, and comprehensive tour through the horrors of Hollywood. To be released in 2008 as a feature film starring Robert De Niro and featuring appearances from Bruce Willis, Sean Penn, and John Turturro, among others, Grove Press's reissue of Linson's hysterical memoir will include a new foreword, the film's script, and several black-and-white shots from the film.

Praise For What Just Happened?: Bitter Hollywood Tales from the Front Line…

Art Linson’s dark gem of a book is a wickedly funny and sardonic insider’s look at life in the belly of the beast. It is the best user’s manual to Hollywood I know.” Peter Biskind, author of Down and Dirty Pictures: Miramax, Sundance, and the Rise of Independent Film

Art Linson puts a film freak exactly where he or she wants to be: in the Fox screening room during the studio brass’s horrified first look at Fight Club. . . . Linson gives readers a glimpse into a bizarre world where It’s good’ is the absolute worst thing you can say about a movie.” Entertainment Weekly