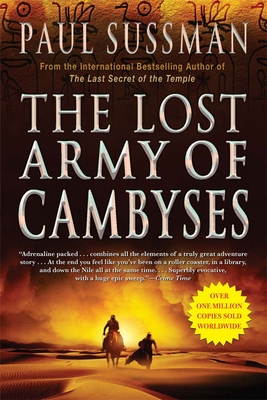 The Lost Army of Cambyses

In 523 BC, the Persian pharaoh Cambyses dispatched an army across Egypt's western desert to destroy the oracle at Siwa. Legend has it that somewhere in the middle of the Great Dune Sea his army was overwhelmed by a sandstorm and lost forever. Two and a half millennia later a mutilated corpse is washed up on the banks of the Nile at Luxor, an antique dealer is savagely murdered in Cairo, and a British archaeologist is found dead at the ancient necropolis of Saqqara. The incidents appear unconnected, but Inspector Yusuf Khalifa of the Luxor police is suspicious, as is the archaeologist's daughter, Tara Mullray. Lured into a labyrinth of intrigue, violence, and betrayal by a mysterious hieroglyphic fragment and rumors of a mythic lost tomb, what began as a search for the truth becomes a race for survival. Confronted by both present day adversaries and ghosts from their pasts, Khalifa and Mullray find themselves on a trail that leads into the desert's unforgiving, burning heart, and the answer to one of the greatest mysteries of the ancient world.

Praise For The Lost Army of Cambyses…

Adrenaline-packed . . . combines all the elements of a truly great adventure story . . . At the end you feel like you’ve been on a roller coaster, in a library, and down the Nile all at the same time. . . . Superbly evocative, with a huge epic sweep.” Crime Time

A plot as complex as a hall of mirrors, and almost as gripping as a death threat.” Kirkus Reviews

At last, a thriller that gets away from the hackneyed old curse of Tut’ stuffthe fast-paced plot is one among many good things in this very assured novel.” Scotland on Sunday