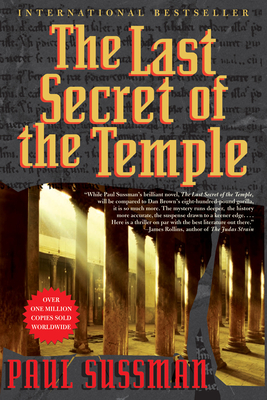 The Last Secret of the Temple

In the year 70 AD, as the Romans sacked and destroyed the Holy Temple in Jerusalem, a young Jewish boy was hidden away and chosen as the guardian of a great secret. For seventy generations this secret remained safeguarded. But in present day Israel, a Jewish radical threatens to reveal this hidden truth and use it to rend apart the fragile Middle East--and only an unlikely duo of hardened detectives of very different origins and a young, enterprising Palestinian journalist can unite to ward off disaster. A relentless and fast-paced thriller that moves from Egypt to Jerusalem to the Sinai Desert, that spans the millennia and involves Cathar heretics, Nazi prisoners, and modern-day suicide bombers, Paul Sussman's The Last Secret of the Temple is a thrilling, roller-coaster adventure that brilliantly examines the participants on both sides of the Arab-Israeli conflict. Timely, important, and completely absorbing, it marks Paul Sussman as one of today's great thriller writers.

Praise For The Last Secret of the Temple…

While Paul Sussman’s brilliant novel, The Last Secret of the Temple, will be compared to Dan Brown’s eight-hundred-pound gorilla, it is so much more. The mystery runs deeper, the history more accurate, the suspense drawn to a keener edge.Here is a thriller on par with the best literature out there.” James Rollins, author of The Judas Strain

Not just a tightly plotted, richly observed, thought-provoking thriller, but one with a soul.” Raymond Khoury, author of The Last Templar

A brilliant detective novelPaul Sussman has managed the impossible: a multi-layered quest where all the characters are real and alive, and we should expect the completely unexpected.” Katherine Neville, author of The Eight

Another surefire winner from a gifted storyteller.” Steve Berry, author of The Templar Legacy

The Last Secret of the Temple won’t disappoint.Sussman succeeds on the strength of his intelligence, empathy, and sense of paceKhalifais a fine creation.” Ross King, The Washington Post