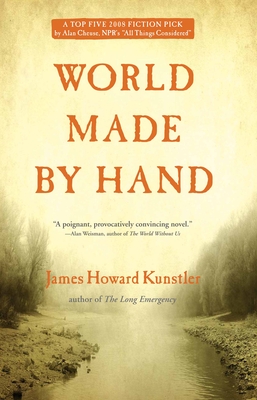 World Made by Hand (Paperback)

In The Long Emergency celebrated social commentator James Howard Kunstler explored how the terminal decline of oil production, combined with climate change, had the potential to put industrial civilization out of business. In World Made by Hand, an astonishing work of speculative fiction, Kunstler brings to life what America might be, a few decades hence, after these catastrophes converge. For the townspeople of Union Grove, New York, the future is nothing like they thought it would be. Transportation is slow and dangerous, so food is grown locally at great expense of time and energy, and the outside world is largely unknown. There may be a president, and he may be in Minneapolis now, but people aren't sure. Their challenges play out in a dazzling, fully realized world of abandoned highways and empty houses, horses working the fields and rivers, no longer polluted, and replenished with fish. With the cost of oil skyrocketing--and with it the price of food--Kunstler's extraordinary book, full of love and loss, violence and power, sex and drugs, depression and desperation, but also plenty of hope, is more relevant than ever.
or support indie stores by buying on
Copyright © 2020 American Booksellers Association