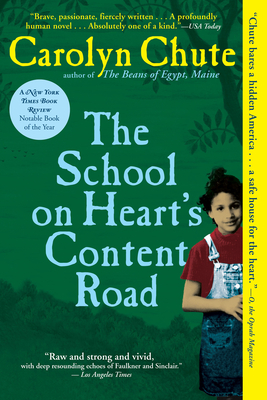 Carolyn Chute's newest paperback returns to her beloved town of Egypt, Maine and delivers a rousing, politically charged portrait of those living on the margins of our society.
The School on Heart's Content Road begins with Mickey Gammon, a fifteen-year-old dropout who has been evicted from home and seeks shelter in the Settlement—a rural cooperative in alternative energy, farm produce, and local goods, founded by "the Prophet." Falsely demonized by the media as a compound of sin, the Settlement's true nature remains foreign to outsiders. There, Mickey meets another deserted child, six-year-old "Secret Agent Jane"—a cunning, beautiful girl whose mother is in jail on false drug charges and who prowls the Settlement in heart-shaped sunglasses, imagining her childish plans to ruin the community will win her mother's freedom. As they struggle to adjust to their new, complex surrogate family, Mickey and Jane witness the mounting unrest within the Settlement's ranks, which soon builds to a shocking crescendo.
Vehement and poetic, The School on Heart's Content Road questions the nature of family, culture, and authority in an intensely diverse nation. It is an urgent plea from those who have been shoved to the fringes of society, but who refuse to be silenced.

Brave, passionate and raw, fiercely written . . . A profoundly human novel . . . Absolutely one of a kind.”USA Today

[A] vibrant pastiche of a novel . . . [with] energy-on-the-loose prose and anti-establishment atmospherics.”Chicago Tribune

Carolyn Chute emerges as a modern-day Dickensian voice for the losers in class warfare. . . . [The School on Heart's Content Road is her]best book to date. . . . We have our Dickens now.”San Diego Union Tribune

Conscience-altering . . . Chute bares a hidden America . . . [offering] perspectives on the need for justice and mercy, a safe house for the heart.”O, the Oprah Magazine