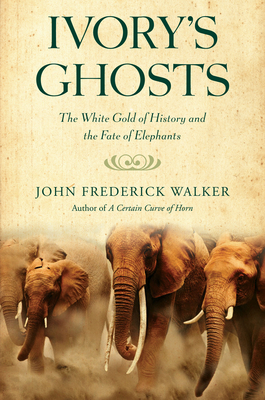 Praised for the nuance and sensitivity with which it approaches one of the most fraught conservation issues we face today, John Frederick Walker's Ivory's Ghosts tells the astonishing story of the power of ivory through the ages, and its impact on elephants. Long before gold and gemstones held allure, humans were drawn to the "jewels of the elephant"--its great tusks. Ivory came to be prized in every culture of the world--from ancient Egypt to nineteenth-century America to modern Japan--for its beauty, rarity, and ability to be finely carved. Elephants tusks were transformed into sensuous figurines, sacred icons, scientific instruments, pistol grips, and piano keys. But the beauty came at an unfathomable cost. Walker lays bare the ivory trade's cruel connection with the slave trade and the increasing slaughter of elephants in the nineteenth and early twentieth centuries. By the 1980s, elephant poaching reached levels that threatened the last great herds of the African continent, and led to a worldwide ban on the ancient international trade in tusks. But the ban has failed to stop poaching--or the emotional debate over what to do with the legitimate and growing stockpiles of ivory recovered from elephants that die of natural causes.

Praise For Ivory's Ghosts: The White Gold of History and the Fate of Elephants…

[An] entertaining chronicle...Ivory’s Ghosts admirably tells the story of this enchanting substance while making clear that as long as there are elephants, there will be ivory. Now, surely, it is ivory's turn to help ensure that there will always be elephants.”Leon Lazaroff, The Hartford Courant

Walker provides sensitive and insightful analysis...Ivory, he acknowledges, is as wondrous as the creatures that produce it...Walker sees the future of elephants not in an absolute ban on all ivory, but in a system of sustainable harvesting and wildlife management. It’s a difficult balancing act, to be sure, but ivory can its bloody past...to become a self-renewing resource which can fund national parks, stabilize local economies, and preserve the impressive creatures that make it.”Laurence A. Marschall, Natural History

[A] tour de force examination of the history of ivory, humankind's lust for this exquisite treasure, and the demise of the elephant and human decency in the process of this unholy quest...Walker is a scholar and a perfectionist, but his meticulous examination of the allure of ivory reads like a novel that is impossible to put down...Whether you agree with this approach to conservation or not, read Ivory's Ghosts if you have any affinity for the history and future of this magnificent animal that has been sacrificed over the ages for what amounts to the white gold of its teeth...This book is a provocative, fascinating and compelling read. Highly recommended.”Georgianne Nienaber, The Huffington Post

Walker colorfully illustrates the [ivory] trade’s history...While Walker doesn’t pretend to offer definitive answers to the threats these pachyderms face, understanding the importance of the issues he raises is critical to the survival of more than elephants. In this comprehensive work with a serious message, there is never a dull moment.”Anthony Brandt, National Geographic Adventure

John Frederick Walker is a veteran journalist and conservationist who has been traveling and reporting on Africa since 1986. His work has appeared in The New York Times, National Geographic Traveler, Africa Geographic, Wildlife Conservation, and numerous other publications.
or
Not Currently Available for Direct Purchase