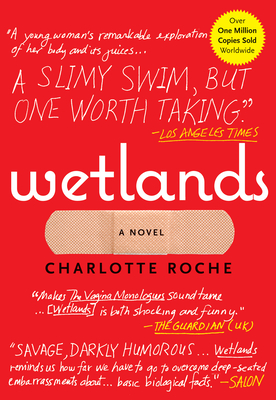 Wetlands--an international sensation with more than a million copies sold worldwide--has been at the center of a heated debate about feminism and sexuality since its publication last spring. Charlotte Roche's controversial debut novel is the story of Helen Memel, an outspoken, sexually precocious eighteen-year-old lying in a hospital bed as she recovers from an operation. To distract herself, she ruminates on her past sexual and physical adventures in increasingly uncomfortable detail. The result is a funny, shocking, and fearlessly intimate manifesto on sex, hygiene, and the compulsion to obliterate the covenant that keeps girls clean, quiet, and nice.

Thirty-year-old Charlotte Roche, born in High Wycombe but raised in Germany, has been a recognizable face in her adopted home country since she started working as a presenter on Viva, the German equivalent of MTV, in the mid-1990s. She went on to write and present programs and late-night talk shows for Arte and ZDF, and won the highly respected Grimme Prize for television in 2004.
Loading...
or support indie stores by buying on