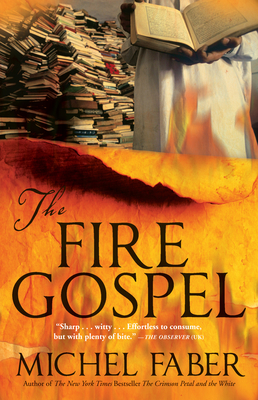 From The New York Times best-selling author of The Crimson Petal and the White, Michel Faber's The Fire Gospel is a wickedly funny, acid-tongued, media-savvy picaresque that delves into our sensationalist culture. Theo Griepenkerl, a Canadian linguistics scholar, is sent to Iraq in search of artifacts that have survived the destruction and looting of the war. While visiting a museum in Mosul, he finds nine papyrus scrolls tucked in the belly of a basrelief sculpture: they have been perfectly preserved for more than two thousand years. After smuggling them out of Iraq and translating them from Aramaic, Theo realizes the extent of his career-making find, for he is in possession of the Fifth Gospel, and it offers a shocking and incomparable eyewitness account of Christ's crucifixion and last days on Earth. A hugely entertaining, and by turns shocking story, The Fire Gospel is a smart, stylish, and suspenseful novel.

Michel Faber has written five previous books, including the international bestseller The Crimson Petal and the White, and the Whitbread-shortlisted novel, Under the Skin, both of which have been published all over the world. He has also won several short-story awards, including the Neil Gunn, Ian St James and Macallan. Some Rain Must Fall, his debut collection, won the Saltire First Book of the Year award in 1999. Born in Holland, brought up in Australia, he now lives in the Scottish Highlands.
Loading...
or
Not Currently Available for Direct Purchase