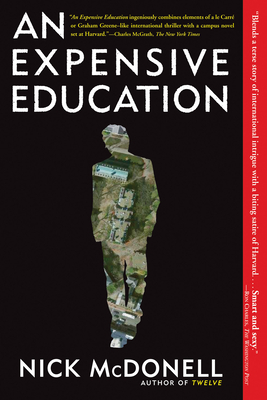 Mike Teak has a classic Harvard profile. He's a twenty-five-year-old scholar/athlete from an upper-class family who was recruited by his godfather to work for a U.S. intelligence agency. On a covert mission in a Somali village, he delivers cash and cell phones to Hatashil, a legendary orphan warrior turned rebel leader. It's a routine assignment until, minutes after they meet, the village is decimated by a missile assault, and although Mike escapes, his life is changed forever.
Echoing across continents, the assault disrupts professor Susan Lowell, who has just won a Pulitzer Prize for her book celebrating Hatashil. Also shaken is Lowell's student,
David Ayan, who was born in the targeted village a world away from Harvard's most exclusive final club, the Porcellian, which is courting him and Jane, the smart, risk-taking daughter of East Coast money who's sleeping with him. David Ayan struggles with his identity and Susan Lowell struggles against rumors about her relationship with Hatashil, who has been accused of ordering the village massacre. But it is Mike Teak who faces a deadly struggle--because when he discovers a horrific conspiracy he immediately realizes that he has become expendable, with nowhere to run and no one to trust.