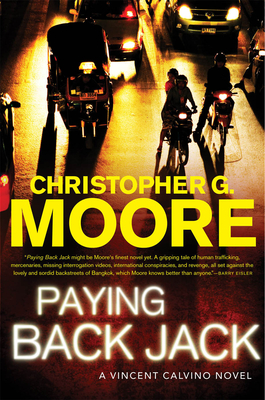 Christopher G. Moore's prize-winning series of crime novels set in Bangkok has been translated into eleven languages and critically acclaimed around the world. Featuring Vincent Calvino, a disbarred American lawyer working as a PI in the dangerous and steamy Thai capital, the books offer gripping plots, fascinating characters, and unparalleled insight into one of the world's most entrancing cities. In Paying Back Jack, Calvino agrees to follow the "minor wife" of a Thai politician and report on her movements. His client is Rick Casey, a shady American whose life has been darkened by the unsolved murder of his idealistic son. But what seems to be a simple surveillance job pulls Calvino into a quest for revenge, as well as a perilous web of political allegiance. Calvino narrowly escapes an attempt on his life and then avoids being framed for a murder only through the calculated lever-pulling of his best friend, Thai police colonel, Pratt. But unknown to our man in Bangkok, in an anonymous apartment tower in the center of the city, a two-man sniper team awaits its shot, a shot that will change everything. Paying Back Jack is classic Christopher G. Moore: densely-woven, eye-opening, and riveting.

Praise For Paying Back Jack: A Vincent Calvino Novel…

Paying Back Jack might be Moore's finest novel yet. A gripping tale of human trafficking, mercenaries, missing interrogation videos, international conspiracies, and revenge, all set against the lovely and sordid backstreets of Bangkok that Moore knows better than anyone.” Barry Eisler

Moore is an old Thailand hand, having lived in Bangkok since 1988, and it shows persuasively on every passing page.” Bookpage

[Moore] makes Bangkok breathe and work as part of his cast. It’s akin to what George Pelecanos does Moore is a stylist he writes with the angry and sad voice of Ross Macdonald and the flow of and beauty of Raymond Chandler. The Calvino series is distinctive and wonderful, not to be missed.” The Rap Sheet

Thai traditions and cultural motifs infuse every bit of this book and make for fascinating reading. . . . Moore obviously brings his own experiences of years of living in Bangkok to the story. His love and understanding of Thai sentiments and protocol come across on every page, making the stories even more rich and fulfilling.” Reviewing The Evidence

An absolute delight this story is so tightly woven and entertaining it is hopeless to try to put it down. Not only was it new and fresh, but I feel like I have taken a trip to the underbelly of Thailand. It is impossible not to love this book." I Love a Mystery

It's easy to see why Moore's books are popular: While seasoned with a spicy mixture of humor and realism, they stand out as model studies in East-West encounters, as satisfying for their cultural insights as they are for their hard-boiled action.” The Japan Times

"Moore creates a cast of vibrant characters worth of the best Elmore Leonard caper for this hard-edged, stylish mystery.... His Vincent Calvino is at once in the finest tradition of the lone private detective and a complete original." Matt Benyon Rees, author of The Samaritan's Secret

Moore has the intellectual and emotional ability to perceive what is in the hearts and minds of the Thai populace. Not least, he grasps the nuances of language.” Bangkok Post

Christopher G. Moore is an exceptional writer. . . . The way the different characters, which seem unrelated to each other, are finally brought together is superb literary craftsmanship. Paying Back Jack is a tale which will have you snarling at the intrusion of a telephone. . . . Get this book.” Pattaya Mail

"A lot of the evil that exists in Bangkok lays buried beneath the duel headstones of 'culture' and 'tradition'. In Paying Back Jack, Moore isn't afraid to dig the dirt. He knows the system, he knows the city, and he paints it beautifully." Colin Cotterill, author of The Coroner’s Lunch

"Underneath Bangkok society is a deeply encrusted demiworld of hope, despair, corruption, and courage that Moore, an American-born writer who has lived there for almost twenty years, paints with maestrolike Dickensian strokes." The Seattle Times