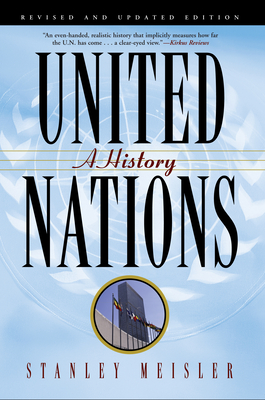 United Nations: A History begins with its creation in 1945. Although the organization was created to prevent war, many conflicts have arisen, ranging from The Korean War, to The Six Day War, to genocide in Bosnia and Rwanda. Stanley Meisler's in-depth research examines the crises and many key political leaders. In this second edition, Meisler brings his popular history up to date with accounts of the power struggles of the last fifteen years, specifically spotlighting the terms of secretaries-general Boutros Boutros-Ghali, Kofi Annan and Ban Ki-moon. This is an important, riveting, and impartial guide through the past and recent events of the sixty-five-year history of the United Nations.

Praise For United Nations: A History…

Balanced and insightful, this book is a must for anyone who wants to understand where the U.N. has been and, more importantly, how we might best use its potential for the future.” Thomas R. Pickering, U.S. ambassador to Russia and former ambassador to the U.N.

Stanley Meisler tells the story of the United Nations, its promise and its problems, with clarity and authority. He brings to life the history of the world organization and [65 years] of America’s hopes for and frustration with the world government This is a definitive account of the United Nations for a general audience, told by a master.” Jim Hoagland, chief foreign correspondent, The Washington Post

Stanley Meisler, the author of three books, served as a Los Angeles Times foreign and diplomatic correspondent for thirty years, assigned to Nairobi, Mexico City, Madrid, Toronto, Paris, the United Nations and Washington. He still contributes articles to the Times and writes a commentary for his website, stanleymeisler.com.
Loading...
or support indie stores by buying on