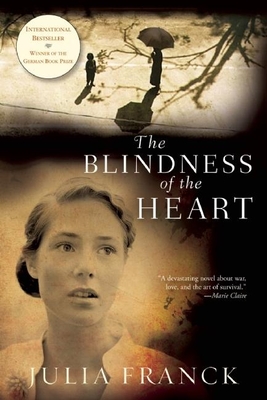 The Blindness of the Heart

An international best seller and winner of the German Book Prize, The Blindness of the Heart is a dark marvel of a novel by one of Europe's freshest young voices--a family story spanning two world wars and several generations in a German family. In the devastating opening scene, a woman named Helene stands with her seven-year-old son in a provincial German railway station in 1945, amid the chaos of civilians fleeing west. Having survived with him through the horror and deprivation of the war years, she abandons him on the station platform and never returns. The story quickly circles back to rural Germany and Helene's childhood, which came to an abrupt end with the outbreak of the First World War. Her father is sent to the eastern front, and her Jewish mother withdraws from the hostility of her surroundings into a state of mental confusion. As we follow Helene into adulthood, we watch riveted as the costs of survival and ill-fated love turn her into a woman capable of the unforgiveable.

Praise For The Blindness of the Heart…

Travel back to another era, to another sensibility, to an age when fantasy and nightmare mingled in the air with the scent of lime blossom, when survival would soon come to depend on the capacity for selective forgetting. . . . With her enthralling, richly imagined and remorseless novel . . . Franck emerges on the literary stage with a work . . . [that] brings together the haunting folk echoes of Dinesen’s Winter’s Tales, the visual immediacy of Isherwood’s Goodbye to Berlin, the narrative cohesion of Mann’s Buddenbrooks.”The New York Times Book Review

"Spellbinding . . . The young woman at the center of Julia Franck’s acclaimed novel The Blindness of the Heart ranks among the most haunting characters to be found in European fiction about twentieth-century horrors. . . . At times, the novel feels more like an eyewitness account than historical fiction.”Vogue

A devastating novel about war, love, and the art of survival.”Marie Claire

In her powerful first novel to be translated into English . . . Franck wrestles with [the] question, why did so many Germans appear blind to the horrors on their horizon [at the start of WWII]? . . . Franck’s insights are profound and alarming, and her storytelling makes the familiar material read fresh.”Publishers Weekly (starred review)

Franck’s description of Helene’s desperate loneliness cuts to the bone with devastating effect. . . . Helene’s heart is not blind; it’s numb. The novel is not a justification of her actions, but something more complexa portrait of the unheroic but human need for escape.”Barnes & Noble Review

Winner of the German Book Prize . . . this is a great, big silence-breaker of a novel, a laser beam into the German darkness from a writer, one feels, has a great deal more to say.”Evening Standard (UK)

An excellent evocation of life among ordinary’ Germans during the first half of the 20th century . . . Beautiful . . . Devastating.”The Washington Times

One of the most haunting works I have ever read about twentieth-century Germany . . . The book’s moral perspective is faultless, as is Franck’s sensitivity to character, sexuality and the struggle to be a free woman in a fascist society. . . . The Blind Side of the Heart is a masterpiece.”The Independent

Although squarely within the venerable genre of the German multigenerational novel, this selection is both more astute and more subtle than most realist works addressing Germany’s twentieth-century blindness of the heart.’ [The Blindness of the Heart] will show U.S. audiences why Franck deserves all of the praise she is getting abroad.”Booklist (starred review)

A rich, moving, and complex novel . . . A brief summary cannot do justice to the penetrating imagination of this book, to the author’s certainty of tone and to the wealth of significant detail she provides. [Julia Franck] offers a panorama of a society stumbling blindfolded towards disaster.”The Scotsman

The most astounding piece of storytelling of the season . . . The way Julia Franck weaves together stories from the emotional depths and interactions and unpacks them again with an almost joyful thoroughness is exhilarating.”Der Spiegel (Germany)

Winner of the major German literary award . . . Franck’s bold, often shocking family saga is fearless. . . . There is a relentless sense of purpose about the complex, ever-shifting narrative that continually tests the reader.”The Irish Times

The Blindness of the Heart is nothing short of a masterpiece. The novel is epic in it proportions and tells the story of two World Wars and the consequences, loneliness and despair that result from a series of hardships.”Aesthetica Magazine (UK)

This novel has everything it needs: talent and skill and something to say. It is hot and cold, cruel and idyllic, sensual and sober.”Die Zeit (Germany)

Julia Franck was born in Berlin in 1970. The Blindness of the Heart, which won the German Book Prize and has sold over 800,000 copies in Germany alone, is her first novel to be translated into English.
Loading...
or support indie stores by buying on