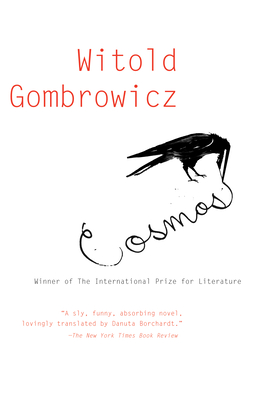 Milan Kundera called Witold Gombrowicz "one of the great novelists of our century." His most famous novel, Cosmos, the recipient of the 1967 International Prize for Literature, is now available in a critically acclaimed translation, for the first time directly from the Polish, by the award-winning translator Danuta Borchardt. Cosmos is a metaphysical noir thriller narrated by Witold, a seedy, pathetic, and witty student, who is charming and appalling by turns. On his way to a relaxing vacation he meets the despondent Fuks. As they set off together for a family-run pension in the Carpathian Mountains they discover a dead bird hanging from a string. Is this a strange but meaningless occurrence or is it the beginning of a string of bizarre events? As the young men become embroiled in the Chekhovian travails of the family running the pension, Grombrowicz creates a gripping narrative where the reader questions who is sane and who is safe?

The renowned Polish author, Witold Gombrowicz (1904-1969) lived, virtually unknown, in Argentina, writing novels, stories, and plays for twenty-five years before taking up residence in France. He wrote four novels, Trans-Atlantyk, Cosmos, Pornografia, and Ferdydurke, which, together with his plays and his three-volume Diary, have been translated into more than thirty languages.

A master of verbal burlesque, a connoisseur of psychological blackmail, Gombrowicz is one of the profoundest late moderns, with one of the lightest touches.” John Updike

Cosmos is a vicious and uncompromised little gem of the obscene.” Adam Novy, The Believer

Borchardt’s graceful, powerful, and inventive translation is a great gift to all lovers of Witold Gombrowicz’s quirky prose.” Jaroslaw Anders on Cosmos

[Cosmos] will hold special appeal for fans of Camus' The Stranger. In this deft new translation, Cosmos, reveals itself as a challenging but important work.”Frank Sennett, Booklist (starred review)

Probably the most important 20th-century novelist most Western readers have never heard of.” Benjamin Paloff, Words Without Borders

Cosmos is a compulsively unsettling philosophical drama veiled as a quotidian mystery. . . . Borchardt’s new English translation conveys a world wrought with an interconnectedness, or perceived interconnectedness, that struggles to understand meaningfully a series of events that defy logical association.”David Thomas Holmberg, Rocky Mountain Review of Language and Literature