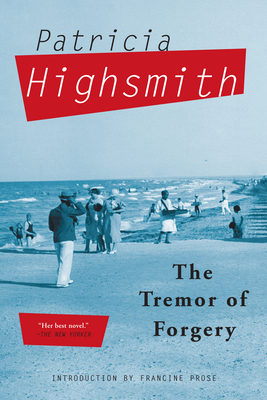 The Tremor of Forgery (Paperback)

The Tremor of Forgery is considered by many to be Patricia Highsmith's finest novel. Set in Tunisia in the mid-1960s, it is the story of Howard Ingham, an American writer who has gone abroad to gather material for a movie too sordid to be set in America. Ingham is cool towards Ina, the girlfriend he left behind in New York, but his feelings start to change when she doesn't answer his increasingly aggravated letters, and John Castlewood, the filmmaker who hired Ingham, fails to show in Tunisia. Amid the tea shops and alleys of the souk, the sun-blasted architecture, and the beaches and hotels frequented by international tourists, will Ingham's morality survive the withering heat? Includes an introduction by Francine Prose.

Praise For The Tremor of Forgery…

"Her best novel." The New Yorker

"Larger, funnier, and more thematically ambitious than any of Highsmith’s other novels."Francine Prose

Highsmith is the poet of apprehension rather than fear. Highsmith's finest novel to my mind is The Tremor of Forgery, and if I were asked what it is about I would reply, 'apprehension.'” Graham Greene

"Highsmith has produced work as serious in its implications and as subtle in its approach as anything being done in the novel today." Julian Symons

"Whereas we read Stephen King or Ruth Rendell to relish the thrills that come from carefully controlled verbal terror, Highsmith is not to be taken so lightly. She conveys a firm, unshakable belief in the existence of evil--personal, psychological, and political."Boston Phoenix