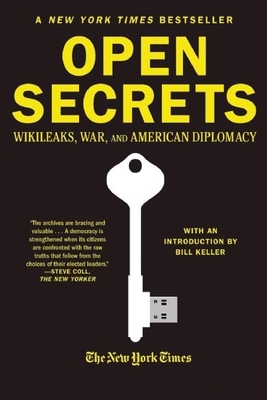 The controversial anti-secrecy organization WikiLeaks made headlines around the world when it released hundreds of thousands of classified U.S. government documents in 2010. Allowed advance access, The New York Times sorted, searched, and analyzed these secret archives, placed them in context, and played a crucial role in breaking the WikiLeaks story. Open Secrets is the essential collection of the Times's expert reporting and analysis, as well as the definitive chronicle of the documents' release and the controversy that ensued. An introduction by Times executive editor, Bill Keller, details the paper's cloak-and-dagger relationship with a difficult source. Extended profiles of Assange and Bradley Manning, the Army private suspected of being his source, offer keen insight into the main players. Collected news stories offer a broad and deep view into Iraq, Afghanistan, Pakistan, and the messy challenges facing American power in Europe, Russia, Asia, the Middle East, and Africa. Also included are editorials by the Times, opinion columns by Frank Rich, Maureen Dowd, and others, and original essays on what the fracas has revealed about American diplomacy and government security. Open Secrets also contains a fascinating selection of original cables and war logs, offering an unvarnished look at diplomacy in action.

Thoughtful analysis of one of the largest leaks of classified information in historyhow it happened, what the secret documents say and what it all means. The New York Times brings welcome order to the chaos of the hundreds of thousands U.S. government documents released last year An important book that gives coherence to a massive data dump.” Kirkus Reviews