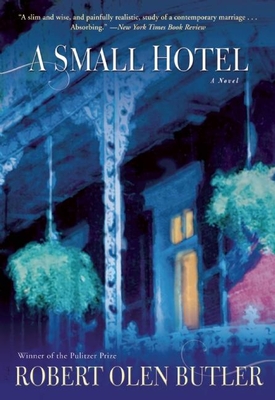 Pulitzer Prize-winner Robert Olen Butler's books have looked at topics as considerable and diverse as hell, extraterrestrials, and Vietnam. His acclaimed twelfth novel, A Small Hotel, chosen for O Magazine's Summer Reading List, offers a more intimate scope as it chronicles the complexities of a disintegrating relationship over the course of twenty years. Set in contemporary New Orleans but working its way back in time, A Small Hotel follows the lives of Michael and Kelly Hays, a couple of the brink of divorce. On the day the Hays are due in court to finalize their separation, Kelly drives from her home in Pensacola and across the panhandle to New Orleans. She checks into room 303 at the Olivier House in the city's French Quarter--the hotel where she and Michael fell in love, and where she must now contemplate a startling decision that will hold devastating consequences for her family, including her nineteen-year-old daughter. Butler masterfully weaves scenes of the present with memories from the viewpoints of both Michael and Kelly--scenes that span two decades, taking the reader back to critical moments in the couple's relationship and revealing a passionate love tragically undone by miscommunication and insecurity.

Praise For A Small Hotel…

"Piercing . . . Bristling with insight . . . Butler’s most impressive accomplishment lies in capturing the mingled emotions of anger, remorse, pain and even love that mark most divorces. . . . Honest and compassionate, Butler’s exploration of a marriage’s sundering is the work of a mature, reflective author.”Star Tribune (Minneapolis)

"Intelligent, deeply moving . . . Remarkably written . . . A Small Hotel is a masterful story that will remind readers once again why Robert Olen Butler has been called the best living American writer."The Fort Worth Star Telegram

Skillful . . . Absorbing . . . Wise and painfully realistic . . . A novel of ideas, an interrogation of the limitations and uses of language.”The New York Times Book Review

[A] deliciously, unapologetically romantic novel . . . [Butler’s] empathetic, precise writing flirts with melodrama but never feels hackneyed. In less skillful hands, this story would be a guilty pleasure. Instead, it’s just a pleasure.”O Magazine

"Richly observed . . . Butler's lucid writing style always conceals turbulent depths beneath a placid surface. He is, in fact, one of the boldest literary writers working today, willing to follow his imagination wherever it leads." Sun Sentinel (Florida)

"Intriguing . . . Intricate . . . Butler skilfully sets up expectations only to twist them, and twist them again. Words said and unsaid can change eveything in an instant."The Mercury News

With mesmerizing detail, Butler excavates layers of memory and illuminates moments of both tenderness and alienation.”The New Yorker

From each spouse’s point of view we witness the feelings that didn’t break the surface at the time, but never went away.”The New York Times

Butler . . . is masterful in the way he draws us into the hearts of his characters. . . . [He] gives the last pages of his quiet book the urgency of a thriller.”Bookpage.com

Engaging . . . Butler [has a] unique writing style . . . with rich descriptions and smooth transitions . . . similiar to Hemingway . . . A Small Hotel is a powerful statement about human nature.” bookreporter.com

Butler brings exquisite sensitivity to the details, unearthing them with the care of [a] good archaeologist.”The Cleveland Plain Dealer

Visions of the past arise in husband and wife on the brink of divorce, as metaphoric, coded conversations, minute gestures, and hurtful silences threaten grave consequences in this tightly focused, intensely imagined, masterfully omniscient novel. Robert Olen Butler understands the failings of men, and he understanding the failings of women just as well.”Susan Vreeland, author of Girl in Hyacinth Blue

A Small Hotel is a gorgeous, hot-blade of a novel, infused with lyric gracea page-turner that tracks the unexpected turns of a marriage. Reading it, I could not pull myself away. It is the story of a man and a womanof love, betrayal and the cost of silence. Revelatory and precise, A Small Hotel is a gem of great literary fiction which contends that the life we live every day is not pedestrian, but charged, lucent. It can turn on a dime by what we say and what we fail to say.” Dawn Tripp, author of Game of Secrets

This tiny, romantic novel could be read at a single sitting, but it's best savored in small slices, accompanied by the quiet ticking of the heart. A marriage on the rocks, a race against time, the duel between past and present that exists in every living soul. As a woman, I particularly admired the portrayal of the husband, Michael, the type of silent man who is an enigma to women and a source of great pain in our relationships with him. Through Butler's insightful rendering, Michael's point of view came as a revelation.” Janet Fitch, author of White Oleander

"Separation and the seemingly insurmountable divide between men and women provide the novel's strongest themes and they do so by unflinchingly illustrating the small moments that seem to come and go unnoticedyet in the end define us."Flavorpill (online)

"Lyrical, haunting . . . Readers will be touched by [Butler's] careful exploration of . . . the human condition and how we relate to each other." Curled up With a Good Book (blog)

ROBERT OLEN BUTLER is the author of 11 novels and three story collections. In addition to a Pulitzer Prize in 1993 and a National Magazine Award in 2001 and 2005, he has received a Guggenheim Fellowship in fiction and an NEA grant, as well as the Richard and Hinda Rosenthal Award from the American Academy of Arts and Letters. He teaches creative writing at Florida State University.
Loading...
or support indie stores by buying on