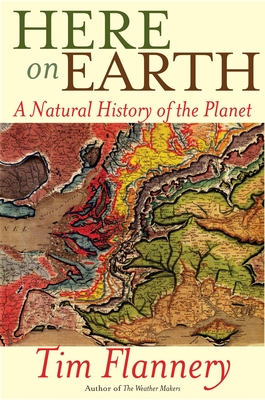 A Natural History of the Planet

Credited with discovering more species than Darwin, praised for his "ability to take complex ideas and--seemingly effortlessly-- make them accessible" (Sydney Morning Herald), Tim Flannery is one of the world's most influential scientists, head of Australia's Climate Change Commission, and a best-selling author. In his newest book, Here on Earth--an immediate best seller in Australia--he has written a captivating and dramatic narrative about the origins of life and the history of our planet. Beginning at the moment of creation with the Big Bang, Here on Earth explores the evolution of Earth from a galactic cloud of dust and gas to a planet with a metallic core and early signs of life within a billion years of being created. In a compelling narrative, Flannery describes the formation of the Earth's crust and atmosphere, as well as the transformation of the planet's oceans from toxic brews of metals (such as iron, copper, and lead) to life-sustaining bodies covering 70 percent of the planet's surface. Life, Flannery shows, first appeared in these oceans in the form of microscopic plants and bacteria, and these metals served as catalysts for the earliest biological processes known to exist. From this starting point, Flannery tells the story of the evolution of our own species, exploring several early human species--from the diminutive creatures (the famed hobbits) who lives in Africa around two million years ago, to Homo erectus--before durning his attention to Homo sapiens, who first started leaving Africa some fifty thousand years ago. Drawing on Charles Darwin's and Alfred Russell Wallace's theories of evolution and Lovelock's Gaia hypothesis, Tim Flannery's Here on Earth is a dazzling account of life on our planet. Also available:
The Eternal Frontier Throwim Way Leg
The Future Easters The Weather Makers