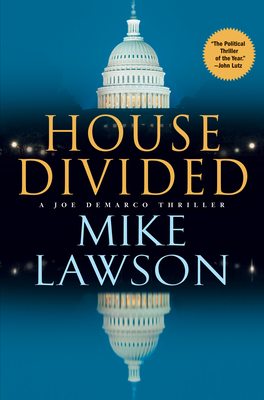 In House Divided, fixer Joe DeMarco gets caught between two of the most powerful organizations in the world: the Pentagon and the National Security Agency.

When the NSA was caught wiretapping U.S. citizens without warrants, a scandal erupted and the program came to a screeching halt. But the man who spearheaded the operation wasn't about to sit by while his country sleepwalked into another 9/11. Instead, he moved the program into the shadows. So when the NSA records a rogue military group murdering two American civilians, they can't walk over to the Pentagon and demand to know what's going on. However, as the largest intelligence service in the country, both in money and manpower, they have plenty of options--mostly illegitimate. DeMarco learns all too well just what the NSA is capable of, but he doesn't like being used, so he fights back.

In Lawson’s excellent sixth Joe DeMarco thriller readers will enjoy watching the smart, funny DeMarco, who’s wise to the ways of Washington, as he extricates himself from one deadly threat after another.” Publishers Weekly (starred review)