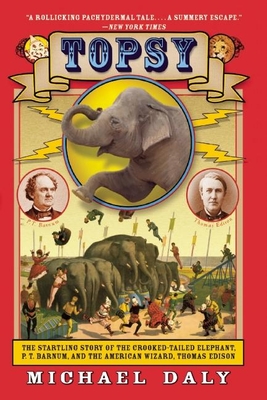 The Startling Story of the Crooked-Tailed Elephant, P.T. Barnum, and the American Wizard, Thomas Edison

"A gripping popular history. ... Vivid ... simultaneously fascinating and horrifying --St. Louis Post-Dispatch In 1903, an elephant named Topsy was electrocuted on Coney Island, and ever since, this bizarre execution has reverberated through popular culture with the whiff of urban legend. But it really happened, and many historical forces conspired to bring Topsy, Thomas Edison, and those 6,600 volts of alternating current together. In Topsy, Michael Daly weaves them together into a fascinating popular history. The first elephant arrived in America in 1796, but it wasn't until after the Civil War that the circus entered its golden age, thanks especially to P.T. Barnum and Adam Forepaugh (or 4-Paw). With fantastic detail, Daly brings this world to life: caravans, crooks, and side-shows. And he captures the life of the animals, both the cruelties they suffered and, when treated with kindness, their remarkable feats. Rich in period Americana, and full of larger-than-life characters--both human and elephant--Topsy is a touching, entertaining read.

Praise For Topsy: The Startling Story of the Crooked-Tailed Elephant, P.T. Barnum, and the American Wizard, Thomas Edison…

Michael Daly vividly revives a rollicking pachydermal tale that riveted New Yorkers a century ago and still survives in a gruesome YouTube video. Daly . . . provides perceptive insights into circus and sideshow elephants and their huckster handlers . . . [and] leads readers on mesmerizing detours that reveal everything from the origins of pink lemonade to a brazen pickpocket’s trick. . . . Even [the] dark episode does not dampen the book’s exuberance. . . . A summery escape.”New York Times

[A] poignant, grim account of dueling impresarios and the American appetite for curiosities centered on one elephant’s life and death. . . . Topsy is a fascinating but disturbing story, a skillfully told and admirably researched reminder of a time not as long ago as we’d like to think.”Wall Street Journal

"A fascinating and moving piece of American history and a meditation on the cost of entertainment and human progress."Kirkus Reviews

Bizarre and remarkable . . . Daly’s fascinating, nuanced portraits of the seedy sides of the circus’s heyday and the dawn of the electric age makes for incredibly entertaining reading.”Publishers Weekly (starred review)

This book should be read by anyone who’s ever been to the circus. I read it and could not bring myself to put it down. Nor could I bring myself to look at the momentpreserved by Edison’s footage and now on YouTubethat this book illuminates so clearly. The story left me a little breathless, and I will never see an elephant in captivity again and not think about Topsy and the cruelty of which we humans are capable. I’ve always respected Michael Daly as a great New York writer. But here, he reaches out to the world beyond New York and goes deep. The results are extraordinary. He humanizes and speaks for those animals who cannot speak. He touches the hearts of those of us who are not animal activists. I’m not so proud to be a member of the human race today, but I am proud to know someone who should be.”James McBride, author of The Color of Water

"Step right up, folks, and read all about it! The amazing tale of elephants, electricity, Edison and Barnum, stunts, fights and ghastly events. Topsy is a 19th-century reality show that boggles the mind as the pages fly by with events that have you laughing out loud one moment and gasping in disbelief the next."Tom Brokaw

Topsy offers a compelling history of late-nineteenth-century scientific genius, American hucksterism, and the chase for the almighty buck; it’s a tale of giants; Edison, Barnum, and an elephant, in which the four legged creature comes across as more humane than her fellow players”Richard Price

After seeing Thomas Edison’s 1903 film 'Electrocuting an Elephant,' author Michael Daly had to know more. The result is Topsy, a sad and fascinating story of a circus elephant at the turn of the last century, when America was flexing the new power of electricity. . . . While the tragic conclusion is known from the outset, the journey in Topsy offers continuous surprise.”Star Tribune (Minneapolis)

Daly’s anecdotes will have readers laughing at the bad luck of the sometimes honest circus goers. . . . [and he] skillfully recreates several examples of animal brutality, the importance of the circus as one of the few affordable forms of entertainment, and the immoral actions of the leading characters.”ForeWord

"Daly deftly weaves the story of one pachyderm's untimely end."Barnes and Noble Review.com

However tragic, Topsy is also a tale of determination, invention, and hope. Readers will come away with an understanding of aspects of American history that include un-sugarcoated descriptions of animal abuse, glories of the circus, and the emergence of electricity.”Baltimore City Paper

Daly expertly leads his readers through this peculiar series of events, as well as the World’s Columbian Exposition in Chicago, the Pan-American Exposition in Buffalowhere McKinley was assassinatedand the development of Coney Island. Complete with letters, photographs and newspaper accounts from the period, Daly enlivens a captivating popular history of this exceptional time. A poignant read.”Brooklyn Daily Eagle

Michael Daly has been a newspaper journalist and columnist for many years, currently at the Daily Beast. He is the author of The Book of Mychal: The Surprising Life and Heroic Death of Father Mychal Judge about his friend, an NYFD chaplain who died on 9/11. In 2002, Daly was a finalist for the Pulitzer Prize for Commentary. He lives in Brooklyn.
Loading...
or support indie stores by buying on