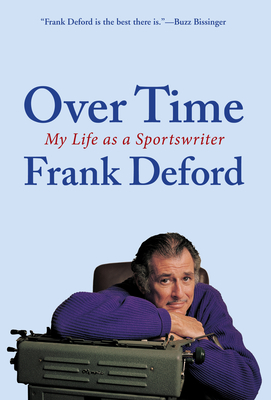 Over Time: My Life as a Sportswriter is as unconventional and wide-ranging as Frank Deford's remarkable career, in which he has chronicled the heroes and the characters of just about every sport in nearly every medium. Deford joined Sports Illustrated in 1962, fresh, and fresh out of Princeton. In 1990, he was Editor-in-Chief of The National Sports Daily, one of the most ambitious--and ill-fated--projects in the history of American print journalism. But then, he's endured: writing ten novels, winning an Emmy (not to mention being a fabled Lite Beer All-Star), and last week he read something like his fourteen-hundredth commentary on NPR's "Morning Edition." From the Mad Men-like days of SI in the '60s, and the "bush" years of the early NBA, to Deford's visit to apartheid South Africa with Arthur Ashe, and his friend's brave and tragic death, Over Time is packed with intriguing people and stories. Interwoven through his personal history, Deford lovingly traces the entire arc of American sportswriting from the lurid early days of the Police Gazette, through Grantland Rice and Red Smith and on up to ESPN. This is a wonderful, inspired book--equal parts funny and touching--a treasure for sports fans. Just like Frank Deford. Praise for Over Time "Equal doses of self-deprecating humor and anecdotal history of American sports journalism are the essence of Frank Deford's entertaining new memoir."--Chicago Tribune "Deford is the Holy Grail. He's simply one of the greatest sportswriters of all time. ... Over Time] has a little bit of everything -- great stories about interviewing everyone from Richard Nixon ... to Jerry Jones. ... Deford played with the Harlem Globetrotters, introduced the world to Bill Bradley, really disliked Rodney Dangerfield, edited the only national sports daily in our history (The National), and has great takes on the history and characters of Sports Illustrated in its formative years. . . . Deford's the best."--Peter King, SI.com "He sketches insightful remembrances of stars like Wilt Chamberlain and Billie Jean King and lavishes affection and admiration on Sports Illustrated colleagues Andre Laguerre, Dan Jenkins, and the 'tortured' writer Mark Kram ... Deford is] sports writing's Sinatra." --San Francisco Chronicle "Endearing... Over Time imparts a sense of a life well lived and fully enjoyed."--New York Times The mixture of homage to sportswriters who came before him, such as Grantland Rice; sometimes wistful vignettes of sports figures like Arthur Ashe; and his own personal reflections on the evolution of sports journalism combine to offer a cultural perspective that transcends a mere job. --Publishers Weekly (Top 10 in Sports) Deford's cred is incredible, his accolades deserved... He does not pull a punch when it comes to boxing or even to the tastes-great, less-filling Miller Lite commercials he once made... Deford] has long been the genuine article. --Los Angeles Times "A cool ride through Deford's career."-- Minneapolis Star-Tribune "Frank Deford is the best there is. His memoir Over Time is beautiful, funny, poignant and poetic." --Buzz Bissinger, author of Friday Night Lights and Father's Day "A wonderful book. Over Time is both a treasure and a treasury."--Sally Jenkins, Washington Post columnist and New York Times bestselling author of It's Not About the Bike "Frank Deford is the best sportswriter I've ever read. If there's a Mount Rushmore of sportswriting, Deford is up there, purple ties and all."--Tony Kornheiser.

The author of eighteen books, Frank Deford has worked in virtually every medium. He is senior contributing writer at Sports Illustrated, where his byline first appeared in 1962. A weekly commentator for NPR's Morning Edition, he is also a regular correspondent on the HBO show Real Sports with Bryant Gumbel. As a journalist, Deford has won the National Magazine Award for profiles, and has been elected to the Hall of Fame of the National Association of Sportscasters and Sportswriters. Voted by his peers as U.S. Sportswriter of the Year six times, he was also cited by The American Journalism Review as the nation's finest sportswriter and was twice voted Magazine Writer of the Year by the Washington Journalism Review. He has been presented with a Christopher Award and awards for distinguished service to journalism from the University of Missouri and Northeastern University. Deford and Red Smith are the only authors with more than one piece in The Best American Sportswriting of the Century, edited by David Halberstam. For his radio and TV work, Deford has won both an Emmy and a George Foster Peabody Award.
Loading...
or support indie stores by buying on