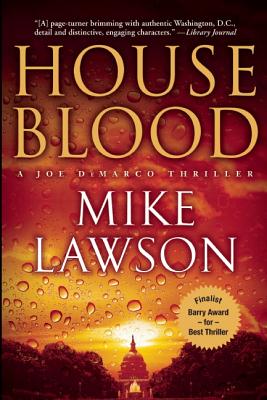 Orson Mulray, CEO of Mulray Pharma, has discovered a drug that could prevent a previously incurable disease and make him billions of dollars. But the drug needs to be tested on humans to prove its efficacy, and Mulray needs more than blood samples - he needs autopsy results.
In naive Lizzie Warwick, Mulray finds a solution. Warwick provides relief to victims of wars and natural disasters ? in other words, people who'd make perfect test subjects. But Warwick's D.C. lobbyist discovers what Mulray is doing. Mulray has the lobbyist killed and frames his partner, Brian Kincaid, for murder.
Two years later, DeMarco is asked to look into the seemingly hopeless case. He has other worries on his mind: his girlfriend has left him, and his friend Emma may be dying. DeMarco doesn't expect to free Kinkaid - much less to become the target of two of the most callous killers he and Emma have ever encountered.
Praise for House Blood
The plot and pace are relentless, and the milieus of Congress, D.C., and disaster relief seem knowingly presented. But character creation is Lawson's greatest talent, and Fiona, her supersoldiers, and of course, the ever-cranky cynic, DeMarco, will rivet readers' attention. A host of lesser characters are nearly as engaging. House Blood is so good it will move long-time political-thriller readers to recall the memorable characters, with, and style of the late, great Ross Thomas. -Booklist (starred review)
Lawson's seventh novel in his Joe DeMarco thriller series is another page-turner brimming with authentic Washington, DC, detail and distinctive, engaging characters. Even the bad guys are interesting. Adventure-seeking readers will love it].-Library Journal
As ever, DeMarco is] good at tracking the bad guys--and it's fun to watch him at it. -Publishers Weekly
A what-happens-next, edge-of-your-seat thriller, told with the author's clear prose and storytelling skills.--George Easter, Deadly Pleasures.

A former senior civilian executive for the U.S. Navy, MIKE LAWSON is the author of seven novels starring Joe DeMarco: "The Inside Ring," "The Second Perimeter," "House Rules," "House Secrets," "House Justice," "House Divided" and "House Odds." He lives in Seattle.
Loading...
or support indie stores by buying on