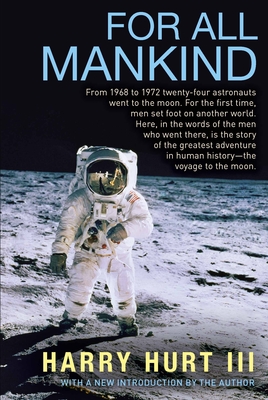 Between December 1968 and December 1972, twenty-four men captured the imagination of the world as they voyaged to the moon. In For All Mankind, Harry Hurt III presents a dramatic, engrossing, and expansive account of those journeys. Based on extensive research and exclusive interviews with the Apollo astronauts, For All Mankind remains one of the most comprehensive and revealing firsthand accounts of space travel ever assembled. In their own words, the astronauts share the sights, sounds, thoughts, fears, hopes, and dreams they experienced during their incredible voyages. In a compelling narrative structured as one trip to the moon, Harry Hurt recounts all the drama and danger of the lunar voyages, from the anxiety of the astronauts' prelaunch procedures through the euphoria of touchdown on the lunar surface.

Updated with a new introduction by the author for the 50th anniversary of the Apollo 11 moon landing, For All Mankind is both an extraordinary adventure story and an important historical document.

HARRY HURT III is an award-winning journalist and the author of six nonfiction books. He lives in Miami Beach, Florida.
Loading...
or support indie stores by buying on