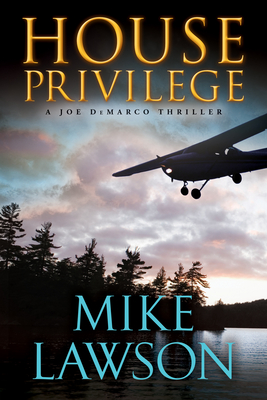 In House Privilege, the fourteenth novel in the DeMarco series, Mike Lawson sends his likeable protagonist on a journey that begins in Boston and ends up in a country beyond the reach of the law.

Fifteen-year-old Cassie Russell, the only daughter of a mega-rich Boston couple, is the sole survivor of a plane crash that killed her parents. She's also the goddaughter of the newly elected Speaker of the House, John Mahoney, and after the crash Mahoney becomes her legal guardian. Normally, Mahoney would send his kind-hearted wife to deal with his new ward, but she's unavailable so he dispatches his fixer, Joe DeMarco, to make sure the girl's okay. DeMarco's job is only to put things into a holding pattern until Mrs. Mahoney is able to step in and take charge--but DeMarco unintentionally flips over a rock and out from under it crawls a lawyer, the one managing Cassie's vast estate. DeMarco learns the lawyer has been embezzling from the estate and may have killed Cassie's parents.

What should have been a simple assignment unleashes murderous plots involving a Boston mob boss and his Irish thugs, and things quickly escalate from there. DeMarco ends up chasing the scheming lawyer halfway around the world to save Cassie and ensure that justice is done. And, this being DeMarco, the legal niceties are mostly ignored.

House Privilege is one of the best instalments yet in Edgar Award-nominee Mike Lawson's long-running series.

Mike Lawson is a former senior civilian executive for the U.S. Navy. He is the Edgar Award-nominated author of thirteen previous novels starring Joe DeMarco and three novels with his protagonist Kay Hamilton.
Loading...
or support indie stores by buying on