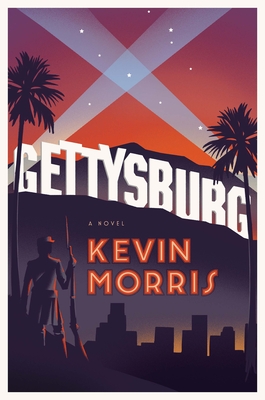 From the critically acclaimed author of All Joe Knight and White Man's Problems, a hilarious and wildly engaging novel about a forty-seven-year-old lawyer and producer in Hollywood, who takes part in a Civil War reenactment to escape the monotony of his ordinary life

As a young man, John Reynolds fled his provincial hometown of Gettysburg, Pennsylvania for Los Angeles, lured by the promise of a life fueled by the excitement of show business. But after twenty years in Hollywood, Reynolds feels existentially unfulfilled. He resides in a beautiful mansion with his wife and daughter, and his business is booming, but Reynolds remains despondent as his attempts to pivot into producing his own movie projects fail again and again.

Depressed and at a creative dead-end, Reynolds finds himself inexplicably drawn back to the historical setting of his youth: he has secretly signed up to participate in a weekend-long reenactment of the Battle of Gettysburg in the unlikely California town of Enchino, sixty miles east of Los Angeles. Just before his departure, an ex-Playmate--the very centerfold of Reynolds's adolescent daydreams--pitches him her idea for a reality TV show. When Reynolds impulsively invites the former Playmate and her best friend, a former Miss Universe, to accompany him to the reenactment, his plans for a solitary weekend of self-discovery run amok.

With a compulsively readable narrative that offers a satirical portrait of Hollywood--the deal-making, the politics, the pitches--Gettysburg is an intelligent and powerful book about contemporary America.

Kevin Morris is the author of the acclaimed story collection White Man's Problems and has written for the Wall Street Journal, Los Angeles Times, and Filmmaker Magazine. He produced the highly regarded documentary Hands on a Hardbody and was a co-producer and Tony Award winner for The Book of Mormon. He lives in Los Angeles.
or support indie stores by buying on
Copyright © 2020 American Booksellers Association