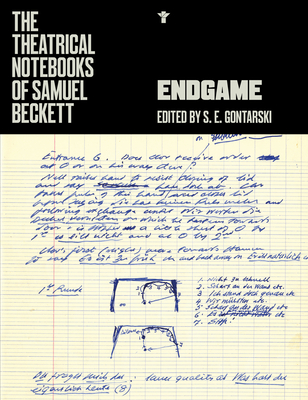 From the mid-1960s, Samuel Beckett himself directed all his major plays in Berlin, Paris, and London. For most of these productions he meticulously prepared notebooks for his personal use.

The theatrical notebooks of Beckett that are reproduced in facsimile here are translated and annotated and thus offer a remarkable record of his own involvement with the staging of his texts. They present his solutions to practical problems but also provide a unique insight into the ways he envisaged his plays. With additional information taken from Beckett's own annotated and corrected copies, the editors have been able to constitute a new revised text for each of these major plays.

Beckett directed two separate productions of Endgame, once with the Schiller Theater Company in Berlin in 1967, and again with the San Quentin Drama Workshop in 1980. Beckett's revisions for both maintain a consistency that makes a 'corrected' (Beckett's word) text not only possible but desirable, a reflection of the substantial amount of thinking and theatrical testing the work has undergone since its publication. No previous edition includese the complete production-generated changes. This volume includes, moreover, the 'final' text for Endgame revised and approved by Samuel Beckett.

Samuel Beckett (1906-1989), one of the leading literary and dramatic figures of the twentieth century, was born in Foxrock, Ireland and attended Trinity University in Dublin. In 1928, he visited Paris for the first time and fell in with a number of avant-garde writers and artists, including James Joyce. In 1937, he settled in Paris permanently. S. E. Gontarski, Robert O. Lawton Distinguished Professor of English at Florida State University, specializes in twentieth-century Irish Studies, in British, U.S., and European Modernism, and in performance theory. He has been a resident Fellow at the Djerassi Foundation, The Rockefeller Foundation at Bellagio, The Bogliasco Foundation, and a Visiting Scholar at the American Academy in Rome. He has been awarded four National Endowment for the Humanities research grants, has twice been awarded Fulbright Professorships, has been Guest Editor of the following: American Book Review, The Review of Contemporary Fiction, and Modern Fiction Studies, and most recently Drammaturgia.
Loading...
or support indie stores by buying on