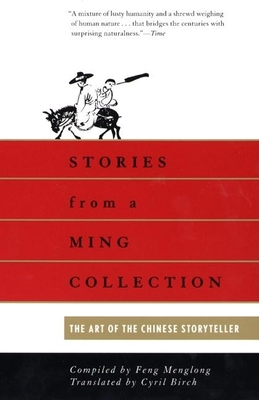 Stories from a Ming Collection

The Art of the Chinese Storyteller (UNESCO Collection of Representative Works: European)

The popularity of the Chinese storyteller goes back to the marketplace of the T’ang dynasty, but the familiar figure came into its own in the twelfth and thirteenth centuries. This selection of stories from Feng Menglong’s collection, Stories Old and New (originally published in 1624), includes representative types of the storyteller’s traditional art. The Pearl-Sewn Shirt” is a cautionary romance describing the tragedy of a broken marriage; the heroic biography, which depicts a neglected man of high worth gradually receiving recognition, is represented by Wine and Dumplings"; an authentic twelfth-century forerunner of the detective story is found in The Canary Murders." The other tales concern traffic in the supernatural, didactic admonitions to observe morality in sex and loyalty in friendship, and realistic accounts of the meanness and corruption of official life. Also includes The Lady Who Was a Beggar,” The Journey of the Corpse,” The Story of Wu Pao-an,” and The Fairy’s Rescue.”