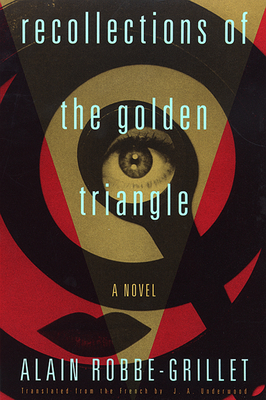 Recollections of the Golden Triangle (Robbe-Grillet)

A provocative novel by the most influential living French writer, Recollections of the Golden Triangle is a tour de force: a literary thriller constructed of wildly diverse elementsfantasy and dream, erotic invention, and the stuff of popular fiction and movies taken to its farthest limits.
A secret door that is opened slightly by an electronic device, a beautiful hanged factory girl, a pale young aristocrat whose blood apparently nourishes his vampiric lover, the evil Dr. Morgan who conducts his experiments in tertiary dream behavior, the beautiful and sinister women from the world of horror films, and the investigating police, who are not all what they seem to be, are just some of the ingredients of this intriguing new novel by the French master of the intellectual thriller, whose novels and films have effectively changed the way we can look at the real world today.
Recollections of the Golden Triangle challenges the reader to find his own meaning in its descriptions, clues, and contradictions, and to play detective by assembling the pieces of the fictional puzzle.

Alain Robbe-Grillet (1922-2008) was a prominent postwar avant-garde novelist and filmmaker. He was a founder of the Noveau Roman literary movement, along with Nathalie Sarraute, Michel Butor and Claude Simon. He is the author of The Erasers, The Voyeur, Jealousy, In the Labyrinth, Recollections of the Golden Triangle, and La Maison de Rendez-vous.
Loading...
or support indie stores by buying on